The spring tidal ranges experienced over the Celtic Seas region are shown in Figure 1A. In the open Atlantic tidal waves are generally small but they increase as they move eastwards across the shelf and are further enhanced by the funnelling effect of bays and estuaries. Thus, for example, halfway up the Shannon Estuary on Ireland's West Coast the average tide is 4.5m but at the head of the estuary it is almost 1m higher. 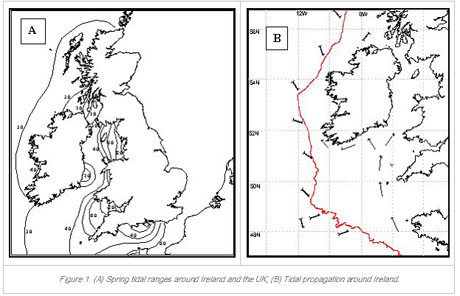 The general flow of tidal waves in Irish waters is shown in Figure 1(B). These propagate from both north and south, meeting just south-west of the Isle of Man at an amphidromic point (a point at which there is no variability in depth due to tidal activity). There is another amphidromic point south of Islay on the Malin Shelf.Tidal ranges on the Malin Shelf from 0.5m on a neap tide (1m on a spring tide) in the Sound of Jura just south of the amphidromic point south of Islay, to 1.6m on a neap tide (4.5m on a spring). Further offshore and north of Skye the tidal range is reduced. Within the Irish Sea maximum tidal ranges occur on the Lancashire and Cumbria coasts where the mean spring tides have a range of 8m, contrasting with Carnsore Point on the south eastern Irish coast where the range is only 1.75m.

In Ireland direct recording of changes in tidal elevation is on going in most Irish ports although up to now continuous records have been rare. Many Irish Port Authorities report tidal data to Proudman Oceanographic Laboratory at Birkenhead in the UK on an ongoing basis.Proudman publishes tidal information on the web for selected UK & Irish ports. All data is checked and validated. Predictions are compared to observed data to ensure quality and accuracy.