The Marine Institute continues to gather and analyse data from Storm Ophelia.  Despite escaping much of the worst of the wind damage associated with ex-hurricane Ophelia on Monday 16th October, a short lived but notable surge of 1.6m just after 3pm resulted in flooding in a number of well known locations across Galway City.

Storm surges occur when strong winds ‘push’ water up against a coastline and low atmospheric pressure associated with a weather system such as Ophelia raise the sea surface further. Surges in the sea level, measured by the Irish National Tide Gauge Network, were seen around the Irish coast but the timing of the storm passing over Galway with its associated peak in wind speed coincided with the approach of high tide resulting in flooding at the Docks, Spanish Arch and Salthill Promenade.

What was unusual was how quickly the surge dissipated; predicted high tide occurred just 30 minutes after the peak surge, but the surge itself had dropped by 1.25m to only 35cm in that time. The unusual nature of the surge can most likely be explained by a rapid change in direction and speed of the wind field in the Bay but further investigation is required to understand the event fully. 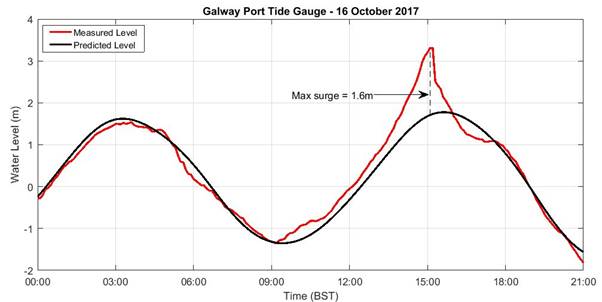 The Irish National Tide Gauge Network, managed by the Marine Institute in collaboration with the OPW, monitors the sea level at fifteen stations around the coast supporting: observations for recreational users, navigation and commercial activities; tidal predictions; flood warning; and long term sea level variability. Tidal observations from the network and tidal predictions (6 days up to 2 years) can be found here.

You can also check out data from our Irish Weather Buoy Network which captured record wave heights during Storm Ophelia.  See more at  https://www.marine.ie/Home/site-area/news-events/press-releases/record-…