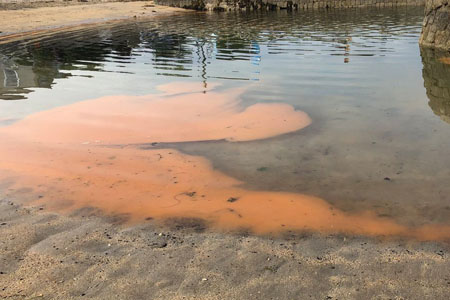 Speaking about the occurrence Joe Silke, Marine Institute said, “We have confirmed from samples today the presence of a phytoplankton species called Noctiluca scintillans. These blooms have been reported along the east coast of Ireland for the past few weeks and are typical for this time of the year. Last year there were extensive blooms of the species in the south west of the country and we typically see them every year.”

“This species is well known as a summer member of the coastal phytoplankton and can discolour the water to an orange or brown colour as the cell counts increase when it blooms or accumulates against the shoreline. Noctiluca scintillans is harmless to humans and fish just tend to avoid the accumulation where the water is discoloured. When the bloom decays or at night time there can be some deoxygenation of the water, leading to localised smells similar to other decaying algae such as seaweed,” Joe Silke said.

Noctiluca scintillans is also bioluminescence, and at night blue light is emitted when disturbed by waves on the shore or in the wave of a boat.