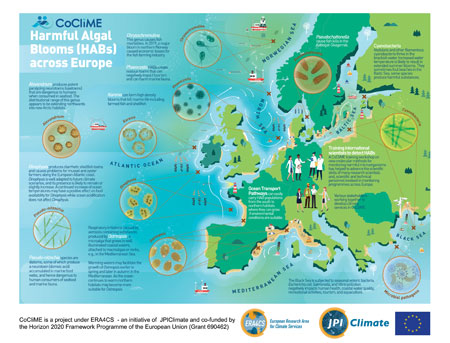 The researchers, with expertise in climate change, social science, economics, modelling, marine biology, chemistry and physics were partners in the CoCliME project. The central purpose of the CoCliME (Co-development of Climate Services for adaptation to changing Marine Ecosystems) project was to create climate adaptation services in partnership with representatives from marine related businesses, regional authorities and coastal communities who are directly impacted by Harmful Algal Bloom events. The harmful microscopic plankton, come in many shapes and sizes, and cause issues for shellfish harvesting, fish farming, fisheries, tourism and human health.

Dr Caroline Cusack of the Marine Institute said, "Ocean climate-driven changes in Harmful Algal Bloom (HAB) distributions and abundances will continue to directly impact marine related businesses and coastal communities. Working closely with those affected by blooms, the CoCliME partners tailored a number of useful services in the areas of decision support, training and outreach."

CoCliME decision-support services
CoCliME economists developed a shellfish trade ban database in France with future government plans to extend it nationwide. The database is used to investigate shellfish production closures, and determine the potential economic impacts closures may have on the local shellfish industry. Harmful Algal Blooms represent 90% of motives for closing the farming zones. The effects can last over several weeks to several months and occur almost yearly with some shellfish areas impacted several times a year.

In 2019, after an exceptional harmful algal bloom that resulted in massive amount of farmed salmon mortalities in Norway, CoCliME researchers developed a new HAB monitoring programme with the Norwegian Food Safety Authority, the Norwegian Directorate of Fisheries, and mussel/fish farmers and together they are continuing the work to develop a 'one-stop-shop' website for the aquaculture industry.

In the Mediterranean, CoCliME researchers worked closely with water and health agency representatives to coordinate a monitoring programme to identify harmful Ostreopsis bloom events in summer as aerosolised chemicals from these blooms can cause mild respiratory irritations in beach users. Researchers connected to the Ramoge Agreement (France, Monaco and Italy) and from Spain participated in CoCliME and monitored increases of Ostreopsis blooms in the Mediterranean and Atlantic, which is helping public authorities and private stakeholders to better identify bloom impacts.

"It contributes to increasing awareness on climate ocean and human health. They shed light on influences of climate change on the development of HABs and the social and economic aspects as well as the health component that they induce in a coastal area such as the Mediterranean, which is particularly touristy," said Anne Vissio, Secrétaire executive, Accord RAMOGE.

There are now plans to continue the coordination of a HAB alert service. In Sweden, ocean climate models developed in CoCliME provided useful information on what the future cyanobacteria bloom risks are as the climate changes.

"CoCliME gave me new insights into the harmfulness of different phytoplankton taxa and the forcing factors of bloom formation. The projected climate change effects on cyanobacteria blooms in the Baltic Sea is useful information for me," said Malin Persson of the Swedish National Food Agency.

Dave Clarke, Shellfish Safety Manager at the Marine Institute Ireland, who attended one of CoCliME training workshops said, "Molecular methods offer reliable detection to enable industry and regulatory authorities to make informed risk management decisions. To have courses like this is extremely beneficial and valuable where laboratory personnel can be trained and learn new molecular techniques that assist in their daily statutory monitoring and research activities."

"The hands on qPCR course allowed me to gain a comprehensive understanding of new tools for the detection of HAB species in Europe" said Laia Viure, who conducts monitoring of Ostreopsis cf ovata in the Catalan coast.

CoCliME Outreach
Today, scientists have an important role in translating technical scientific jargon into a language that users can understand. In the CoCliME project, many users requested accessible information on the impacts of climate change on the ocean and harmful algal blooms for a wide audience including policy makers, general public, local and regional authorities and medical professionals. With this in mind, CoCliME researchers developed infographics and illustrations to inform and build awareness on the importance of our ocean, the changes that are occurring and the potential impacts on ecosystems and human communities. Post project plans include the use of the graphics, translated into relevant languages, for use in brochures, websites, training courses and other publication materials.

David Mellett, Irish Climate Action Regional Office, Atlantic Seaboard North Coordinator stated, "Local authorities are on the front line of climate change and climate adaptation because the physical effects of climate change manifest locally through incidents of flooding, coastal erosion or other extreme weather events and our measure of climate risks needs to be understood in the context of geographically defined areas. All local authorities have adopted Climate Adaptation Strategies and are working towards adapting their functions and supporting communities build resilience and plan for the impacts of climate change. Coastal zones are especially in need of climate services for adaptation, as they are increasingly threatened by sea level rise and its impacts, such as submergence, flooding, shoreline erosion, salinization and wetland change. The climate services for adaptation to our changing marine ecosystems developed under the CoCliME project will help build awareness of the importance of our oceans, better understand the risks and opportunities for coastal communities and inform decision making into the future. The ocean climate infographics already developed under the project is a clear example of how scientific information can be communicated to a broad audience to help build awareness of the role of our oceans in regulating climate change and the increasing risks and opportunities to the cultural and economics of coastal communities."

The CoCliME (Co-development of Climate Services for adaptation to changing Marine Ecosystems) Project, was coordinated by the Marine Institute and funded by the Irish Environmental Protection Agency (EPA), the European Commission and other European national funders.

CoCliME project:
Project CoCliME is part of ERA4CS, an ERA-NET initiated by JPI Climate, and funded by EPA (IE), ANR (FR), BMBF (DE), UEFISCDI (RO), RCN (NO) and FORMAS (SE), with co-funding by the European Union (Grant 690462). The EPA funding for the ERA-NET initiative falls under the EPA Research Programme 2014-2020, a Government of Ireland initiative funded by the Department of the Environment, Climate and Communications. It is administered by the Environmental Protection Agency, which has the statutory function of co-ordinating and promoting environmental research.

Disclaimer:
Although every effort has been made to ensure the accuracy of the material contained in this press release, complete accuracy cannot be guaranteed. Neither the Marine Institute nor the authors accept any responsibility whatsoever for loss or damage occasioned or claimed to have been occasioned, in part or in full, as a consequence of any person acting or refraining from acting, as a result of a matter contained in this press release.