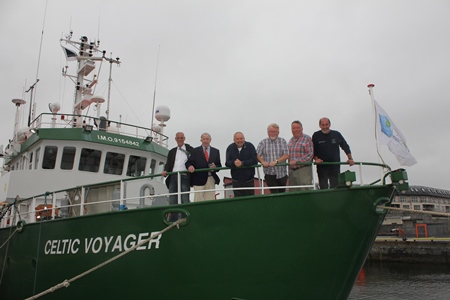 The RV Celtic Voyager was built in the Netherlands and arrived in Ireland in July 1997 to replace the RV Lough Beltra (1978 – 1997) as part of the national strategy to build Ireland's capabilities in marine research. "Moving from the 21m Lough Beltra that had originally been a trawler, to a 31.4m research vessel was the beginning of a new era in marine science in Ireland, where the Institute was able to provide a purpose built platform that could operate further out in our ocean territory.  This enabled high quality research and monitoring informing decisions about Ireland's marine resource into the future," explained Mick Gillooly, Director of Ocean Science and Information services, Marine Institute.

The multi-purpose facilities on the vessel has allowed scientists to gather information covering a wide range of ocean sciences, including sea bed mapping and learning more about the marine species and environmental conditions. Specially fitted with scientific equipment in wet, dry and chemical laboratories, having the ability to carry more scientists and being able to spend more time at sea which increased the output of science in Ireland. The Celtic Voyager, in its first full year of operation reached 260 operational days and the scientific output also increased by 150 percent over the output of the Lough Beltra. The vessel also exceeded original expectations about its range by carrying surveys further south in the Bay of Biscay and as far west as the Rockall Trough.

In the last 20 years, the vessel has successfully completed over 4,800 science days and has sailed over 380,000 nautical miles in the course of 595 science surveys in that period; and has had a positive impact on many Irish marine scientists and crew member's careers at sea.

Ireland's marine territory is over 880,000 square kilometres in the Atlantic, Irish and Celtic Seas, and with the INFOMAR Programme, in partnership with the Geological Survey of Ireland, the Marine Institute is completing one of the largest civilian seabed mapping projects in the world. As part of the INFOMAR programme, the RV Celtic Voyager has been responsible for mapping 30,000 square km Ireland's coastal and inshore area since 2007. Using multi-beam technology on the vessel, scientists have collected data producing high resolution maps showing the shape and type of the seabed below at depths between 20 - ~100m.

"Significant discoveries have been made on the Voyager ranging from mapping over 200 shipwrecks around the coast of Ireland including the RMS Lusitania, RMS Leinster and the Kowloon Bridge to revealing new information about the seafloor. In 2007 the survey of Galway Bay revealed for the first time a detailed seafloor and geology of the bay, confirming the location of the Galway Bay Fault, demarking the limits of Galway's granite landscape running northwest to southeast, between Lettermullan/Gorumna Islands in west Connemara and the Aran Islands," explained Thomas Fury, manager of the advanced mapping team at the Marine Institute.

The RV Celtic Voyager has also played an essential role in fisheries scientific research in Ireland, in particular ground fish stocks such as haddock and whiting since its launch in 1997, as well as developing unique underwater television survey methods to gather information the Dublin Bay prawn (Nephrops norvegicus) since 2002. "The capabilities of the vessel has enabled marine scientists to work in conditions allowing them to better recognise significant changes in the abundance and distribution of a wide range of marine species and changes in the environment; and in turn provide sound scientific advice about information on stock size, exploitation status and catch of commercial species," explained Dr Paul Connolly, Fisheries Ecosystems and Advisory services, Marine Institute.

The RV Celtic Voyager has provided scientists the ability to a learn about the oceans dynamic ecological systems as well as ensuring that Ireland complies with national and EU regulations relating to the assessment of water quality and marine food safety. "Initially the vessel was used for looking at the levels of nutrients and pollutants in coastal waters that were either naturally caused by environmental conditions or introduced by humans such as agriculture run off, shipping and industrial activities," explained Jeff Fisher, Marine Environment and Food Safety Services, Marine Institute.

Surveys over the last decade have however increased the level of research to include the collection and assessment of phytoplankton as an indicator of the health of the ocean; as well as recovering samples of sediments and sea bed organisms for biological, chemical and geological analysis so as to assess at the quality and long term changes to sediment dwelling marine species. In more recent years scientists have also used the Voyager for the collection of water and sediment samples to monitor the impacts of climate change, ocean acidification and the introduction of micro plastics to the marine environment.

"In the Voyager's 20th year it is therefore important to recognise the contribution the vessel has made in providing marine scientists, researchers and its crew members, with many years of valued experience at sea, expanding and strengthening marine science in Ireland to help inform decisions affecting our ocean. This increase in activity also contributed to the expansion of Ireland's international role and profile in sustainable marine research, development, innovation and management."