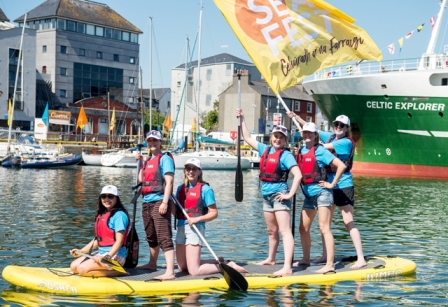 Sunday 1st July, attracted the largest number of visitors ever to SeaFest, with over 50,000 visitors flocking to Galway Harbour and Docks for the final day of festivities. A welcome cool sea breeze carried the crowds to the closing day of SeaFest 2018. World-Record Kite Surfer Francisco Lufinha, from Portugal, was also able to take to the water to showcase his kitesurfing skills to visitors in Galway Bay.Francisco holds the world record for the Longest Journey Kitesurfing without stops, between Lisbon and Madeira Island, covering 874km of the Portuguese Sea in just 48 hours.

Dr John Killeen, Chairman of the Marine Institute said, "Our Ocean Wealth Summit and SeaFest 2018 have both exceeded our expectations in terms of attendance and also for creating public awareness of the immense marine resources which are abundant around the island of Ireland. We are now, as a country, beginning to become more aware of the potential wealth that can be generated by our seas. SeaFest offers a platform to engage the public in the importance of our seas and the contribution to our local and national economy."

Figures released by SEMRU at Our Ocean Wealth Summit, held as part of SeaFest on Friday 29 June, show the economic value of Ireland's ocean economy is €1.8 billion or approximately 1% of GDP.

On a local level SeaFest 2018 generated over €6.5 million in direct income for the city's tourism industry. Accommodation, restaurants and other businesses across Galway benefited from the huge influx of people that descended on Galway Harbour over the weekend.

Galway City Council's Mayor Niall McNelis Neil said, "SeaFest 2018 was a huge success showing once again Galway's unrivalled capacity to host national and international maritime events. Galway has enormous potential to become a leader in the marine world as home to the Marine Institute, The Ryan Institute at NUI Galway, and the Marine and Freshwater Research Centre at GMIT. Its natural harbour is a magnificent resource for the city and provided the most amazing natural amphitheatre for SeaFest over the weekend."

Dr Peter Heffernan, CEO of the Marine Institute was delighted with the number of people who gathered in Galway Harbour to enjoy the festivities.

"SeaFest is all about celebrating the sea, and this weekend proved that the ocean is not only a valuable marine resource, but a source of fun and entertainment and it was great to see so many visitors enjoying the attractions and activities on the water. SeaFest is now regarded as one of the biggest and most successful festivals of its kind in Europe. This would not have been possible without the huge support from a wide range of local, regional and national agencies who came together to plan and stage this largescale event, with special thanks to the Galway Port Company. Our festival volunteers also played an important role in making SeaFest 2018 one to remember." Dr Heffernan said.

Galway Harbour was transformed into a giant interactive 'sea world' for the three day festival and the waterfront was awash with non-stop activities and entertainment for those of all ages. All the events taking place during SeaFest were all free for festival-goers. Crowds got to enjoy thrilling performances and breath-taking aerial acrobatics from world-champion flyboarders in the heart of the harbour. Free sailing and kayaking was on offer and the Irish Sailing Association also offered disabled access for budding sailors over the weekend.

There were open tours available on a number of vessels in the ship filled harbour including one of the newest vessels in the Irish Navy, LÉ William Butler Yeats, the Commissioners of Irish Lights vessel the Granuaile, the Marine Institute's research vessel the RV Celtic Explorer, and pelagic trawler Girl Stephanie. The huge display from the Defence Forces was popular with the young and young at heart. BIM and Bord Bia hosted a showcase of Irish seafood as well as live cookery and fishmongery demonstrations with some of Ireland's top chefs. The dedicated Kids Zone kept little hands busy with art and craft workshops, art installations, touch tank displays and marine –inspired lego. Defence Force displays, and talks with wildlife camera men Doug Allan and Ken O'Sullivan entertained all.