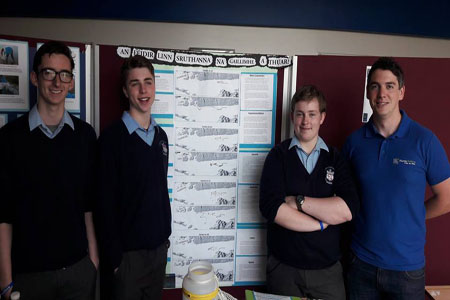 The transition year class from Coláiste Croí Mhuire, An Spidéal and the Ocean Energy team from the Marine Institute, Galway have been contacted by a fisherman off the coast of Scotland who discovered the lost tracking drifter device that was part of their marine scientific project called, 'Project Canister - Tracking the surface currents of Galway Bay'.

The science project was carried out earlier this year leading up to the SciFest Exhibition in Galway-Mayo Institute of Technology, where three students set out to develop four simplified versions of a Lagrangian drifter, which is a floating device used to track currents. The project canisters were designed as a lagrangian drifter, with a surface float attached to an underwater drogue net acting as a sea anchor ensuring that the drifter followed the movement of the surface currents and was not simply blown along the surface by the wind.

"The drifter was designed and built by the students and contained a GPS transmitter as well as a battery bank, which allowed for the drifter to be tracked in real-time providing GPS coordinates of the route it was taking around Galway Bay. Seeing if the drifters would make it to the Aran Islands, the students collected data to better understand the circulation and movements of the surface currents within the Bay and how the currents are influenced by other factors such as tide and wind," explained Conall O'Malley, Scientific & Technical Officer at the Marine Institute.

"The ocean modelling team at the Marine Institute met with the students and were pleased to assist them with background research on tides and wind data, showing them how computer generated ocean current models work. The visit helped the students gain an appreciation of the amount of data and work that is required to produce reliable ocean current models, which in turn helped the group in deciding where to deploy the drifters in the Bay," said Conall O'Malley

Four drifters were deployed in total, each with its own unique identifier so that each drifter could be tracked efficiently. The students followed the drifters for a period of up to two weeks until the drifters found their way back to shore and were retrieved by members of the Marine Institute's Ocean Energy Team. Two of the drifters ended up off the coast of Clare at Fanore, where they made landfall within 1km of each other three days apart. A third canister was recovered from Ros a Mhíl after ten days.

"Remarkably, the fourth canister, which was deemed to have been lost somewhere in Galway Bay after three days when its GPS transmitter failed, was recently recovered 136 days after its launch in Scottish waters by a fisherman named Donald Brown," Conall O'Malley added.

"Therefore, after traveling 600km in the ocean currents around the west coast of Ireland and then recovered from Gott Bay off the Isle of Tiree, the most westerly of the inner Hebridean Islands off the coast of Scotland, it has been a great end to the tale of the lost drifter," said Alan Berry, Team Leader at the Marine Institute.

"The students were delighted that the lost drifter was found – so far away, and this adds to their on-going scientific learning and understanding of the ocean. This experiment certainly shows the importance of the ocean and highlights how we are all inter- connected by the sea locally and internationally," said Dr. Margaret Keady, Science Teacher at Coláiste Croí Mhuire.

Thanking the Ocean Energy team, who were also involved in assisting the transition year class with three other science projects that were entered into the SciFest Exhibition held at GMIT earlier in the year Mrs Triona ní Mhurchu, Principal at Colaiste Chroi Mhuire, added that "Having the SmartBay Observatory in Galway Bay, which is the only place in Ireland and one of the few places in Europe where we can see, hear and count what is happening under the water, in real time, is certainly a welcomed resource for our school, our community as well as researchers at a local and national level."

Welcoming the positive enthusiasm of students and their high level of scientific enquiry during the development of the four marine projects, the Institute congratulated the transition year students on their successes at the SciFest Exhibition. "The range of marine topics covered from learning about whether there are dolphins in Galway Bay, creating a "Beach Buddy" mobile phone app identifying optimum the swimming conditions, as well as determining the age of the fish we eat, all highlighted how the students recognise the importance of understanding the ocean, along with using the best available science and knowledge to inform decision making," said Alan Berry.

"The projects completed by the students also showed the amazing variety and potential opportunities that there are in marine science research and careers, particularly for those who are interested in ocean industries and technology development involving ICT, engineering, marine science, and environmental studies" added Alan.

Project Title: Does Galway Bay support its own population of Dolphins?
Students: Tessa Croke, Róise Nic Dhonnagáin, Rachel Nic Oireachtaigh
Aim: To determine whether or not Galway Bay supports its own population of Dolphins.
Description: Used acoustic data and visual observation data and statistical analysis of same data to determine the numbers of dolphins in Galway Bay.
Data used: Acoustic Data from the SmartBay Observatory hydrophones and data from other hydrophone deployments in the Bay which record marine mammal vocalisations. (in collaboration with Dr.Joanne O'Brien of GMIT)

Project Title: Beach Buddy (App)
Students: Marcus Reinhardt, Bianca Ní Dhonabháin, Dylan Whelan, Elana Nic Fhannacha
Aim: To develop an easy to use app, (green for go, red for no) for swimmers to use in the locality of An Spidéal.
Description: Developed an app aimed at swimmers at the beach in An Spidéal to give information on what conditions were like. Took into account weather conditions and wave/ tidal conditions. All data provided by the SmartBay Observatory.
Data used: Water temperature, wave height, wind direction, wind speed, air temperature, tidal data—All data from SmartBay Observatory (with assistance from Dominic O'Toole, Marine Institute)

Project Title: How old are the fish we eat?
Students: Máire Ní Fhrighil, Líadh Robertson, Caomhín Ó Sé, Aoife Nic Chormaic, Rosie Ní Dhubhghaill, Rebecca Ní Allúráin
Aim: To determine the age of fish that we are eating.
Data used: Determined the age by studying the otoliths (ear bones) of fish from Ros a Mhíl. Students spent a day in the Marine Institute and sampled the fish (length, weight, sex and removed and aged the otoliths) (Big thanks to Grainne Ni Chonchubhair and her team)