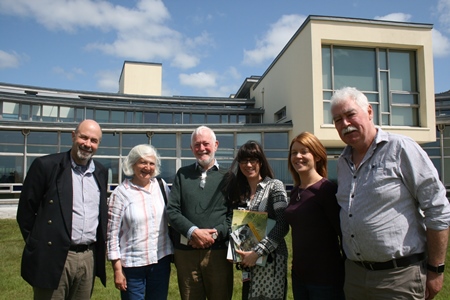 Dr Julian Reynolds, one of Ireland's leading environment and conservation researchers, recently spoke at the Marine Institute about his lifetime of work involving the study of the ecology of crustaceans, the biology of eels and African fish, as well as the extreme habitats of turloughs, bog pools and springs around the world.

Dr Fisher, Director of marine, environment and food safety services welcomed Dr Reynolds, to the Marine Institute congratulating him on his distinguished career stating that "it is a privilege and inspiration to learn about his research spanning over half a century, which continues to influence many of our marine scientists today."

Speaking to staff members in Galway and by remote feed to Newport in Co. Mayo, Dr Reynolds highlighted the importance of studying plants and animals together to fully understand freshwater ecology and ecosystems. He also noted the importance of having the best available science and knowledge to inform decisions relating to the environment.

An Emeritus Fellow and author of over two hundred publications, Dr Reynolds spoke with affection about how his journey in his career first took him to Burrishoole, Newport in county Mayo where he studied salmon, trout, and eels. He then travelled to Ghana in Africa in the 1960's where a new reservoir, 300 km long was being developed. Jumping in the deep-end he had to document over 100 species as well as learn about how river fish would adapt to a still water environment.

By the 1970's Reynolds moved to Canada where he further developed his career in marine biology. Returning to Ireland in the late 1970's, Dr Reynolds became head of the Zoology Department, Trinity College, Dublin. At a time when Ireland was suffering from a recession, he courageously established new courses and seminars in Limnology, Aquatic Methods, Fisheries Biology, Aquaculture, and Postgrad Publishing.

Dr Reynold's distinguished career has involved significant research on freshwater crustaceans including the native white-clawed crayfish, and the ecology of small water bodies including turloughs, where he is recognised nationally and internationally for his expertise. During his visit to Galway, Dr Reynolds donated his lifetime collection of works including 300 articles, books and theses on eel biology, and some 500 of the same on freshwater crayfish, to the Marine Institute.

"We are extremely grateful to receive Dr Reynolds collection of work, which includes rare holdings that are not digitally available. The extensive collection of materials will be housed in the Oceanus Library, where we are delighted to make it available for other scientists who have an interest in this area," said Ms Stephanie Ronan, librarian at the Marine Institute.

Reynolds continues to be involved in research, where he is now keeping his feet wet, assisting his wife botanist Sylvia Reynolds with her research recording plants in Limerick and Longford marshes.