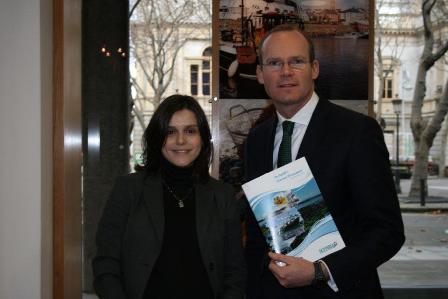 Unit (SEMRU) has published its second report on Ireland’s Ocean Economy as part of their ongoing process of collection and analysis of marine socio-economic data in Ireland.

Results from the report show that in 2010, the direct economic value of the Irish ocean economy was €1.2 billion or approximately 0.8% of GDP. The sector had a turnover of €3.5 billion, and provided employment for approximately 16,300 people (Full Time Equivalent). The report allows for the comparative analysis of the contribution of the marine sector to the national economy in the 2007-2010 period.

Emerging marine industries are growing much faster than established marine industries, albeit from a low base. High tech marine products and services, marine biotechnology, bio-products and marine renewable energy all recorded a large increase in turnover and employment but gross value add was unchanged or decreased.

Dr. Peter Heffernan, CEO Marine Institute welcomed the publication, saying “These trends are in line with other productive sectors and reflect the impact of the global downturn, representing the period at the lowest point of the economic contraction. However, recent data also reported here highlights a positive outlook across a number of sectors, for example seafood, tourism, and shipping sectors are now showing positive signs of recovery and growth.”

The timely availability of statistics across the sector is vital to monitor the targets set out in the Government’s Integrated Marine Plan – Harnessing Our Ocean Wealth. The collection and reporting of marine socio-economic data is essential for evidence based policy and decision-making, economic forecasting and scenario planning.

Dr. Amaya Vega, SEMRU, presented the report to Minister Coveney, and provided copies of the report to members of the newly established Development Task Force, had its first meeting yesterday and operates under the aegis of the Government’s Marine Coordination Group.

The need to build capacity in the area of marine socio-economics was identified in the Sea Change Strategy 2007 -2013. SEMRU was established to carry out this role following the Marine Institute’s Beaufort Marine Research Award to NUI Galway.

The full report is available to download online Here

Based in the College of Business, Public Poli

cy and Law at the National University of Ireland, Galway, SEMRU conducts research in a variety of marine related issues. The main research focus of the unit is on the economic importance of coastal and off-shore marine environments. This involves examining the economic utility of the marine environment (e.g. transportation, recreation) and ecological value (e.g. fisheries, aquaculture) derived from the productivity of associated ecosystems. The coastal and contiguous marine environment surrounding Ireland and the EU in general provides the geographical focus for the research carried out in the unit. Consideration of the human dimension in the management of marine ecosystems is also a critical component of all research projects undertaken.

Since its establishment in 2009, SEMRU has been successful in attracting research funding to support the expansion of its marine socio-economic research programme. The unit is now a partner in a number of European funded projects in the area of the socio-economics of the marine environment. For more information on SEMRU, please visit www.nuigalway.ie/semru/.

The aim of the Irish Ocean Economy Series is to establish a common methodology and provide comparative data to facilitate the identification of trends in the marine economy and ascertain the impacts of policy and other interventions on these trends. Unfortunately, due to data collection and availability issues, data allowing broad coverage of the marine sector has a two year delay, this is the reason the Report published in 2013 reports 2010 data. The inclusion of paragraphs on “Overview of the Policy Regime” and “Sector Outlook” compensate for this, providing a more up-to-date view. Taking 2010 as the baseline year has both benefits and disadvantages given that it represents the bottom point of the recession.

Ireland’s Ocean Economy Report Series is funded through the Beaufort Marine Research Award, which is carried out under the Sea Change Strategy and the Strategy for Science Technology and Innovation (2006-2013), with the support of the Marine Institute, funded under the Marine Research Sub-Programme of the National Development Plan 2007–2013.