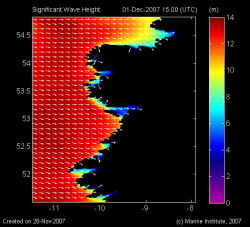 Computer-generated wave forecasts by the Marine Institute and Met Eireann for this Saturday afternoon (1st December) predict that waves with a significant height of up to 14 m could occur in the seas to the west of Ireland (areas shown in red on the diagram).

The forecast can be accessed online at Mare Institute Wave Forecast web page.

Previously the biggest waves recorded by the Marine Institute’s data buoys were at the M1 Buoy to the west of Galway Bay on the 17th January 2005, when waves of 13.4 m were recorded. Similar conditions could occur this weekend if the weather systems develop as predicted.

When a broad area of very low pressure sits in the Atlantic to the north of Ireland, as will happen on this Friday and Saturday, waves are able to build over a considerable distance—which could lead to these extreme waves arriving in Irish waters.

The conditions are expected to be hazardous to all marine users including ships and fishing vessels, as well as individuals who might be walking close to the shoreline, or fishing from the shore in exposed areas of the west.

Wave forecasts are run on the Marine Institute’s High Performance Computer Cluster. The simulations use global predictions of wind and waves, refining these using the detailed geometry of the seabed, to produce predictions on a 1 km grid of Ireland’s Atlantic margin.

The Irish Marine Weather Buoy Network is a joint project designed to improve weather forecasts and safety at sea around Ireland. The buoy network provides vital data for weather forecasts, shipping bulletins, gale and swell warnings as well as data for general public information and research.

The project is the result of successful collaboration between the Marine Institute, Met Eireann, The UK Met Office and the Irish Department of Transport.

The Weather Buoy Network was initiated following a report in 1996 by the Fishing Vessels Safety Authority.  This report highlighted the need for real time data from the coastal region of Ireland to enable more accurate weather forecasts and therefore decrease the number of lives lost at sea.

The project saw the first deployment of the weather buoy M1 in 2000 and is run as a collaboration between the then Department of Communications, Marine and Natural Resources, Marine Institute, The UK Met Office and Met Eireann.

The core aim of the Irish Marine Weather Buoy Network is to feed real time observations to weather forecasters to improve accuracy and hence improve safety in the waters surrounding Ireland.

Data also contribute to the formation of a long term climate data base.  This helps to establish key baseline information such as temperature and salinity values which will, in time, allow researchers to monitor change and determine climatic patterns.

To date, 6 buoys have been deployed and are being maintained around the coast.