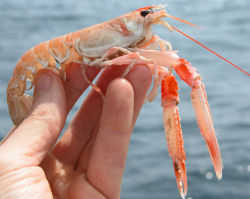 An exciting cross border project to investigate the lives of Dublin Bay Prawns gets underway today (Sunday 19th August) in a cross-border scientific project to use underwater television to survey valuable fishing grounds in the Irish Sea.

The project involves two research vessels – the Marine Institute’s Celtic Voyager and the UK’s new ship Corystes – which will be working together for the first time. The project, which is a joint venture between the Marine Institute and the Northern Ireland Agri-Food and Biosciences Institute, aims to accurately map prawn stocks as a foundation for the sustainable management of this valuable resource.

Dublin Bay Prawns – better known to scientists by their Latin name of  Nephrops norvegicus are the basis of a €30 million per annum fishery and are the mainstay of fishing fleets at Howth, Skeries, Clogherhead, Kilkeel,  Ardglass and Portavogie.

In the past, accurate assessments of the stocks has been hampered by their habit of burrowing deep into soft sands and muds – a challenge that scientists north and south of the border have been working to overcome since 2003 by using underwater TV systems to count the burrows.

“Dublin Bay Prawns are fiercely territorial,” said Dr. Colm Lordan of the Marine Institute. “They seldom move more than 100 meters from their burrows throughout their lifetime, which can last up to 6 or 7 years. This fact allows us to estimate the size of the populations in the Irish Sea quite accurately, even though they extend over some 5,791 km2 in the western Irish Sea.”

Recent surveys suggest that between 7-10 billion prawns live in an area about the size of County Cork in the western Irish Sea.  The good news for the fishing industry is that the Nephrops population in recent years seems relatively stable.

This weekend the two research vessels (RV Celtic Voyager and RV Corystes) rendezvoused in Dublin to co-ordinate their planning and exchange staff before dis-embarking to finish survey work in around 180 sites in the Irish Sea.  Around 15 scientist are engaged in the survey which will take approximately 10 days.

PRAWNS IN THE IRISH SEA

The survey work is co-ordinated and the results are used for stock assessment through ICES (the International Council for the Exploration of the Seas). Dr. Colm Lordan of the Marine Institute is the lead scientist from Ireland and chairman of the ICES Workshop on Underwater Television surveys for Nephrops (WKNEPHTV).

Nephrops is a mud-burrowing species that is protected from trawling while within its burrow. Burrow emergence is known to vary with environmental (ambient light level, tidal strength) and biological (moult cycle, females reproductive condition) factors.   This means that trawl catch rates may bear little resemblance to population abundance.  In addition, growth is known to vary considerably even within stocks and estimation of the age distribution of the stock or catches not readily achievable due to aging problems.  This makes tradition age-based assessments problematic.

Nephrops are closely linked to suitable habitat.  They construct recognisable and countable burrow complexes. They are highly territorial and probably do not move more than a few hundred meters over their life span.

This means that UWTV surveys designed to track burrow abundance on the suitable habitat should be very good indices of stock development.