We call this ‘The Real Map of Ireland’ as you can see that Ireland’s marine territory extends far beyond our coastline up to 220 million acres (approx. 880,000km2) , an area more than 10 times our land mass. 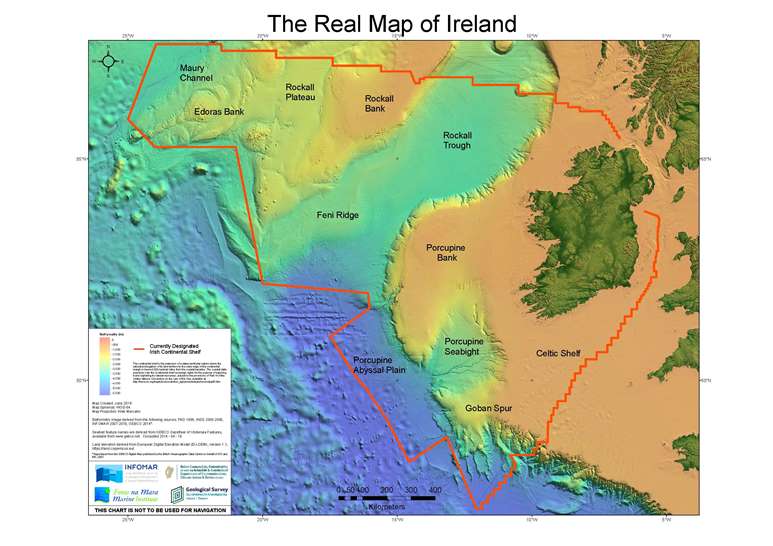 The 'Real Map of Ireland' was developed using seabed information gathered as part of a major programme to map Ireland’s entire seabed territory. The programme began in 1999 as the Irish National Seabed Survey and continues today as INFOMAR*, a joint venture by the Geological Survey of Ireland and the Marine Institute. It’s one of the largest seabed mapping programmes in the world.

The Real Map of Ireland shows Ireland's current designated Irish Continental Shelf, which is one of the largest seabed territories in Europe.

The continental shelf is the extension of a State's territorial waters, where the natural land extends under the sea to the outer edge of the continental margin beyond 200 nautical miles from the coastline baseline. We have sovereign rights over the continental shelf to explore and develop its natural resources, according to the United Nations Convention on the Law of the Sea Part VI.

We've developed lesson plans for primary school teachers to use  ‘the real map’ in the classroom as a handy learning tool.

*Integrated Mapping For the Sustainable Development of Ireland's Marine Resource .

Visit INFOMAR for more information  on the programme.