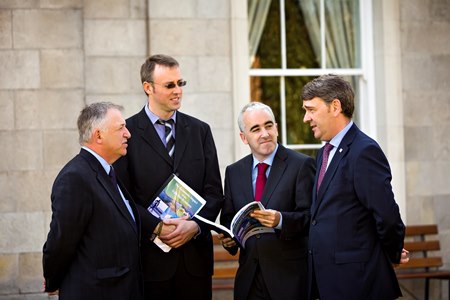 A new report on the Economic Impact of the Irish Bio-Economy was launched in Dublin today, Wednesday, 9 September at the RDS in Dublin. Speaking at the launch, Professor Cathal O’Donoghue, Teagasc Head of Rural Economy and Development Programme, highlighted the strong local linkages between the Irish Bio-Economy, which incorporates the Agriculture, Food, Forestry and Marine sectors.

He commented that; “Due to the fact that bio-economic sectors locate much of their inputs in Ireland, and because they employ relatively more people per unit of output, when these sectors increase their sales and in particular their exports, they generate a greater impact on the economy.”

“Of the 162,000 jobs in the bio-economy in 2010, there were an additional 45,000 jobs elsewhere in the value chain. As much of the bio-economy is located in rural areas, this impact can have a particularly strong effect on rural job creation.”

The analysis utilises the Bio-economy Input Output model (BIO), which studies the linkages between the Bio-Economy sectors and the wider economy. This model has been developed to assess the output and employment multipliers of public policy initiatives. It was developed by the Socio-Economic Marine Research Unit (SEMRU) of NUI Galway and the Rural Economy and Development Programme of Teagasc, in association with the Marine Institute, under Beaufort Award and Teagasc funding. It builds upon the Central Statistics Office’s national more aggregated Input-Output table and previous work by Professor Alan Matthews of Trinity College.

Professor Gerry Boyle Director of Teagasc, welcomed the outcome of this joint initiative between Teagasc and NUI Galway, where the resources of both institutions, together with the Marine Institute were brought together to create a powerful Analytical Infrastructure to assess the impact of public policy and economic change. The model was used recently to support strategic planning in the recent Food Wise 2025 strategy for the Agri-Food Sector. The strategy targets the creation of an additional 23,000 direct and indirect jobs in the agri-food sector all along the supply chain from primary production to high value added product development.

Dr Peter Heffernan, CEO of the Marine Institute emphasised the importance of analytical infrastructure in supporting the ambitious targets of Harnessing our Ocean Wealth – An Integrated Marine Plan for Ireland. “Economic analysis is critical in decision-making in relation to the Atlantic Action Plan that can enable Blue Growth, doubling the size of our Ocean Economy to 2020” said Dr Heffernan.

The Report “The Bio-Economy Input Output Model: Development and Uses”, together with background tables can be found on the Teagasc website http://teagasc.ie/publications/.