The Explorers Education Programme supported the Atlantic Mini-boat Regatta: 'Around the Atlantic – Our Shared Resource' which was a transatlantic funded programme by AORA-CSA who had formed a partnership in 2016 with a href="https://educationalpassages.org/connect/about/" target="_blank">Educational Passages mini-sailboats in the USA.

The miniature unmanned 1½ metre Lancer boat that was found washed ashore in Galway in September 2016 after a four month trans-Atlantic crossing off the coast of Cape Cod in the USA. 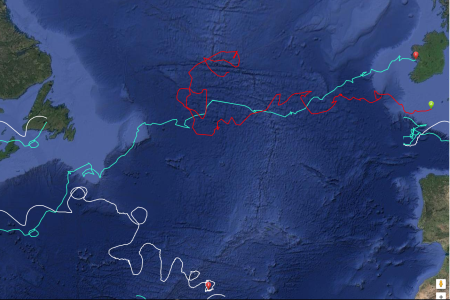 Kaitlyn tracked the boat as part of her school project. She also collaborated with Chloe Rubin producing an illustrated book called Lance. The book tells the adventures of Lance the miniboat while at sea and its rescue by a little girl called Méabh. The book was presented to the Marine Institute and Méabh during Kaitlyn’s visit to Ireland.

Repaired by Ciaran Oliver and James Rattigan from Port of Galway Sea Scouts and flying a new Galway sail, the Lancer boat was launched from the RV Celtic Explorer during its expedition across the Atlantic.

The miniboat was relaunched from the Marine Institute's research vessel RV Celtic Explorer on the 22nd April 2017, in the middle of the Atlantic Ocean.

Méabh Ní Ghionnáin met with Kaitlyn Dow from Connecticut, USA at the Marine Institute during Kaitlyn's visit to Ireland, to see where the boat had landed. 1.5 metre unmanned Lancer sailing boat washed up on her local beach.

The Lancer ins was re-launched from the RV Celtic Explorer: