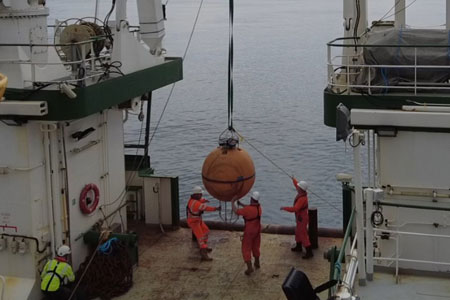 Since 2018 The Marine Research Infrastructures team operate a number of Deep Sea moorings and seabed landers in The North East Atlantic with the aim of advancing a better understanding of key environmental processes in the North Eastern Atlantic Ocean.

Water masses have recognizable properties of temperature, salinity, oxygen, and nutrients, unless they have been modified significantly by mixing with other water masses. Several different water masses are found in the south Rockall Trough, such as Labrador Sea Water, which travels from the western Atlantic, Mediterranean Overflow Water and Subarctic Intermediate Water. Transport of these water masses tells us a lot about ocean circulation in the northeast Atlantic.

Seabed Lander Programme (Established 2018): Six seabed landers with associated moorings and instrumentation to observe shelf and shelf-edge currents. Observations are performed along the water column from 500m below the surface to 3000m depth and

These continuous deepwater  autonomous mooring deployments complement a long-standing annual Research Vessel survey to the site since 2004.   Initially, the original driver was the collection of physical oceanographic data by CTD. The survey has evolved over the years, with chemistry added from 2008 and more recently, biological elements such as plankton hauls are also now included.  The annual survey - led by the Marine Institute, seeks to gather high quality oceanographic data along a targeted section of the Atlantic Ocean starting in Galway Bay along the 53N line and heading out to the South Rockall Trough.