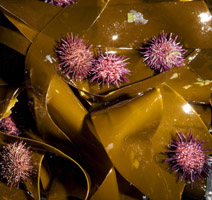 A €5.2 Marine Functional Foods Research Initiative funded by the Marine Institute and the Department of Agriculture and Food will in commence in April 2007. The The Call will be open to all research institutions (higher education and state) on the island of Ireland and Terms of Reference and other details associated with the Call will be announced in early April 2007.

Following the publication of Sea Change, A Marine Knowledge, Research and Innovation Strategy for Ireland 2007 to 2013 by the Marine Institute, and taking into account the recommendations of the Strategy for Science, Technology and Innovation, the Marine Institute and the Department of Agriculture and Food are supporting a new institutional based research programme to develop national capabilities and create additional capacity in marine functional foods and ingredients research. This Marine Functional Foods Research Initiative is being funded as part of the Strategy for Science Technology and Innovation 2006 to 2013. It will commence in 2007 and will make available €5.2 million to establish a research consortium. The Terms of Reference and other details associated with the Call will be announced in early April 2007.

International experts will assess the applications, after which the successful applicant(s) will be invited to complete a detailed proposal for review and discussion in advance of the contract negotiations. Tentative key dates associated with the Initiative include:

At a recent workshop hosted by the Marine Institute and attended by a wide cross-section of food companies, food ingredients suppliers, seafood processors, biotechnology firms and researchers from industry and institutions, a number of areas emerged as research priorities. From early April 2007, it will be possible to obtain the Terms of Reference, the Guide for Applicants and an Application Form from the websites of the Marine Institute and the Department of Agriculture and Food.