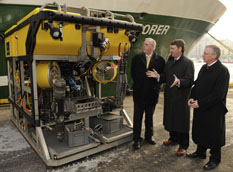 2010 opens a new ‘decade of discovery’ for Irish Marine Science, according to Minister of State at the Department of Agriculture, Fisheries and Food Mr. Tony Killeen T.D. who visited the national research vessel R.V. Celtic Explorer in Galway today (Friday 8th January). The Minister met staff engaged in the wide range of scientific and technical services the Marine Institute provides in support of his Department and the sustainable development of Ireland’s marine sector.

According to Minister Killeen, the national and European investment made in Irish marine science over the past ten years is now showing tangible results in protecting our marine environment and our traditional marine industries while creating new wealth-generating opportunities for the Irish marine sector.

“Progress made in developing national marine research programmes and infrastructure and on the Irish National Seabed Survey to map our 220 million acre marine resource, improved dialogue between scientists and fishermen to explore ways of creating a sustainable fishing industry and new developments under ‘Sea Change – A Marine Knowledge, Research and Innovation Strategy for Ireland’, are all bearing fruit,” said Minister Killeen. “The Marine Institute has earned a high reputation and considerable international esteem both for itself and for Ireland, through its significant contributions to debates on EU and international marine science, its core scientific programmes and strategic planning initiatives and the recent appointment of a senior Institute staff member as Vice-President of the International Council for the Exploration of the Seas (ICES). I am therefore confident that the ambitious goals they have set in realising the development potential of marine functional foods, marine biotechnology, ocean energy and aquatic sensor technology as laid down in the Sea Change strategy can be achieved. Such achievements will represent significant marine contributions to Ireland’s emerging Smart Economy.”

During his tour of the research vessel RV Celtic Explorer Minister Killeen received a full report on the ship’s busy 2009 programme of 330 days at sea including the annual demersal and pelagic fisheries surveys funded under the EU data collection regulations and stock surveys of blue whiting, deepwater fish, and north-west and Celtic Sea herring. He was also briefed on the ‘Coralfish’ survey led by NUI Galway which used the Holland 1to discover a large and previously uncharted coral reef formation off south western Ireland and heard how the ship had ventured north of the Arctic Circle to investigate the fate of salmon smolt at sea as part of the internationally co-ordinated ‘SALSEA’ programme.

2010 will see the Celtic Explorer undertake further fisheries survey work on mackerel egg levels in the Celtic Sea and on the Porcupine Bank, an acoustic survey of blue whiting off the west coast, studies on deepwater fish on the Porcupine and Rockall Banks, as well as the annual groundfish surveys. Groundbreaking work to demonstrate the feasibility of a Modular and mobile Deep Ocean Observatory (MODOO) will also be undertaken in deep water off the southwest coast.

“The increasing reputation that Ireland is achieving in marine science is reflected in the significant awards to Irish researchers under the highly competitive EU Seventh Framework Programme (FP7),” said Dr. Heffernan. “Between 2007 and 2009 Irish marine researchers successfully participated in 38 collaborative projects drawing down grant aid in excess of €13.4 million from this fund - over double the average yearly drawdown of €10.6 million over the five-year period of the Sixth Framework programme from 2002 to 2006. This demonstrates that the Irish marine research community is of international standard and capable of competing with the best in Europe.”

Minister Killeen also viewed the Remotely Operated Vehicle (ROV) Holland 1, an unmanned submersible capable of taking high definition pictures, scientific measurements and even physical samples from the seafloor at any point in Ireland’s seabed territory. This machine has already proved invaluable in work on projects concerning the sustainable fisheries management and the mapping of sensitive marine habitats.