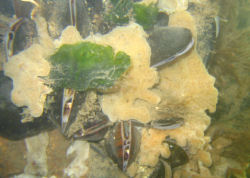 A colonial sea squirt from the Didemnum(pronounced die-DEM-num) group of marine animals has recently been found fouling boats, marina structures and oyster trestles in Ireland.

This particular species of Didemnum is fast-growing and has the potential to outcompete and smother a large number of species and habitats, including some of the most diverse and unique areas of the Irish coastline.

In other parts of the world colonies have been found at water depths ranging from intertidal to continental shelf depths of 65m (213 ft).

Didemnum prefers to settle on rocky reefs and other hard substrate such as mooring lines, wrecks and aquaculture installations.

Potential Impacts of Didemnum infestation include:

Long, ropey or beard-like (see photograph above) and is found hanging from hard surfaces such as docks, aquaculture facilities, and ship hulls, or as extensive mats covering rocky sea beds (pebbles, cobbles, boulders, and rock outcrops). How to distinguish from harmless native species? Native species are not generally found in large colonies and don’t form ropey beard like structures (see photograph).

What can you do to help?

If you see it, report it! Members of the Invasive Species in Ireland Marine Working Group are currently undertaking a survey of sites around Ireland to establish this species current extent.

As part of this survey, the public are encouraged to report all suspected cases to the Report a Sighting page on the Invasive Species Ireland  website or to the Marine Institute (ph: 091-387200; info@marine.ie)

What to do when near sea squirts?

Everyone is urged to thoroughly wash and dry all equipment that was near an infestation of this species. This is essential to avoid contamination of new areas. It is important to do this where the rinse will not return to the marine environment. New infestations may result if you do not undertake this.