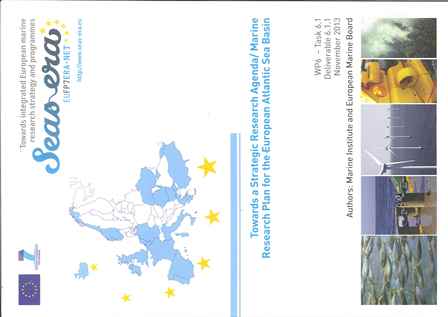 In effect, he said, “The real success of the SEAS-ERA Atlantic partnership  the input and influence the project had on development of the Atlantic Action Plan, published by the Commission in May 2013.”   The EU FP7 SEAS-ERA partnership will host its 3rd SEAS-ERA Strategic Forum in Brussels on 25th February 2014 (http://www.seas-era.eu/np4/242.html)

The FP7 SEAS ERA project (2010-2014) is a network of European marine research funding organisations (RFOs) consisting of 21 partners and two third parties from 18 Member and Associated Member States located along the European seaboard in the Atlantic, Mediterranean and Black Sea (www.seas-era.eu).

The Marine Institute (Ireland) is a partner and joint lead with the European Marine Board (Ostend, Belgium) of Work Package 6.1: A draft Marine Research Plan for the European Atlantic Sea Basin.

The principle aims of the SEAS-ERA network are to improve co-operation between national competitive marine research funding programmes, to facilitate better co-operation in addressing shared opportunities and challenges, to ensure better use of existing resources and capacities, to bridge identified gaps, to avoid duplication, to jointly fund strategic projects of mutual interest and in doing so, contribute to the sustainable development of the marine resource and progress the establishment of the marine component of the European Research Area (ERA).