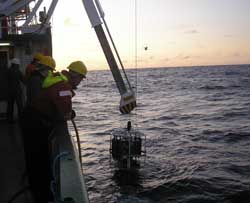 Undergraduate and postgraduate students are being offered the opportunity to plan and run their own five-day marine research missions on the national research vessel RVCeltic Voyager free of charge by an innovate Marine Institute programme known as “Bright Sparks.”

Under the “Bright Sparks” competition, students are asked to write a proposal for a five-day marine research programme and submit it to the Institute by 4.00 pm on Friday 3rd April, 2009.

Each proposal will then be judged on a number of criteria including scientific merit, the importance of the work, value for money and inter-college collaboration by a panel of experts. The winning entry will not only receive five days of ship time aboard the RV Celtic Voyager, but also €5,000 towards survey consumables that may be needed on board.

The scheme, which is run as part of the Integrated Maritime Development Programme (IMEP), is aimed at promoting science education and experience. Previous projects funded under “Bright Sparks” include: ·

The Bright Sparks Awards are specifically designed to introduce students of marine science to Ireland’s research vessel fleet and provides successful applicants with “hands-on” experience in preparing a research proposal, and the design, execution and planning of a marine scientific survey. Participants will also interpret and analyse the data collected and will prepare a detailed final survey report and present the results to staff of the Marine Institute.

Full details and an application form can be found on the Marine Institute’s website at:

or by dropping an email to funding@marine.ie

Results of the competition will be announced on 20th of April, 2009