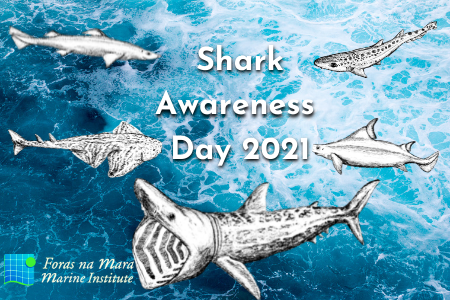 14 July 2021: Today, the Marine Institute is recognising sharks of all shapes and sizes for Shark Awareness Day. Irish waters are home to 71 species of shark, skates and rays, 58 of which have been studied in detail and listed on the Ireland Red List of Cartilaginous fish. Irish sharks range from small Sleeper sharks, Dogfish and Catsharks, to larger species like Frilled, Mackerel and Cow sharks, all the way to the second largest shark in the world, the Basking shark.

Irish waters provide a refuge for an array of shark species. Tralee Bay, Co. Kerry provides a habitat for several rare and endangered sharks and their relatives, including the migratory tope shark, angel shark and undulate ray. This area is also the last European refuge for the extremely rare white skate. Through a European Maritime and Fisheries Fund (EMFF) project, Marine Institute scientists have been working with fishermen to assess the distribution, diversity, and monthly relative abundance of skates and rays in Tralee, Brandon and Dingle Bays.

"These areas off the southwest coast of Ireland are important internationally as they hold some of the last remaining refuges for angel shark and white skate," said Dr Maurice Clarke of the Marine Institute. "This EMFF project has provided data confirming the critically endangered status of some species and provides up-to-date information for the development of fishery measures to eliminate by-catch."

Irish waters are also home to the Black Mouthed Catshark, Galeus melastomus, one of Ireland's smallest shark species which can be found in the deep sea along the continental 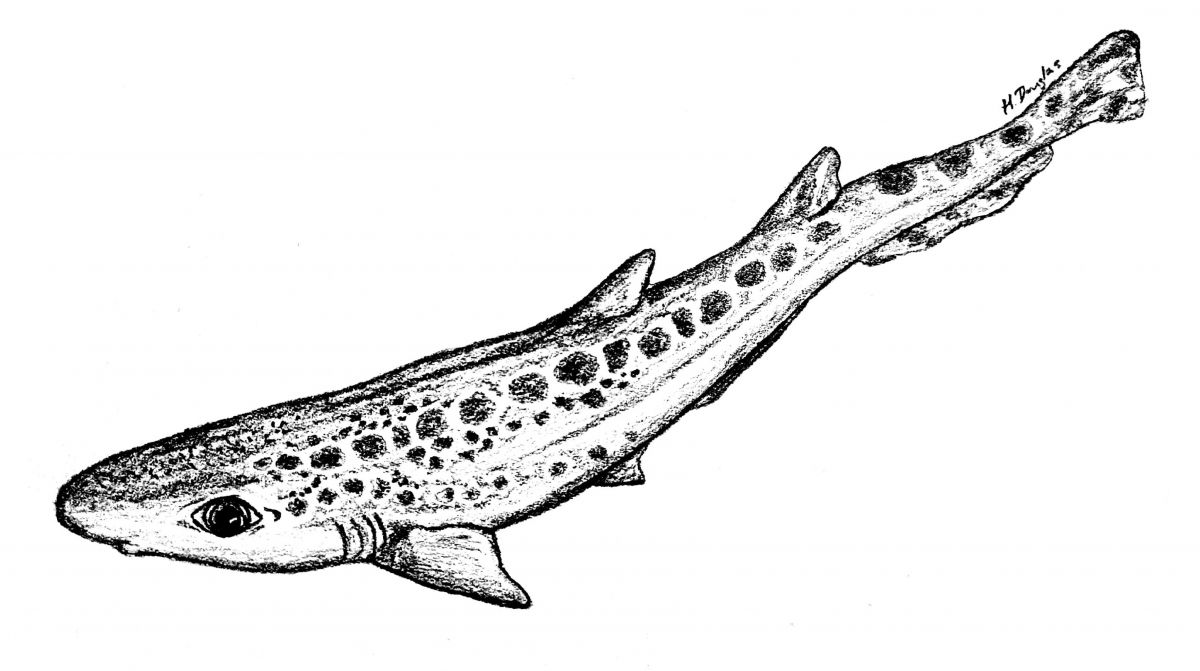 There are two ways that sharks are born, either as live young or from egg casings. In the 'case' of Black Mouthed Catsharks, the nursery discovered in 2018, was notable by the abundance of egg casings or 'mermaid's purses'. Many sharks, rays and skate lay eggs, the cases of which often wash ashore. If you find an egg casing along the seashore, take a photo for Purse Search Ireland, a citizen science project focusing on monitoring the shark, ray and skate species around Ireland.

Another species also found by Irish scientists using the ROV Holland 1 in 2018 was a very rare type of dogfish, the Sail Fin Rough Shark, Oxynotus paradoxus. These sharks are named after their long fins which resemble the trailing sails of a boat, and live in the deep sea in waters up to 750m deep. Like all sharks, skates and rays, they have no bones. Their skeleton is composed of cartilage, much like what our noses and ears are made from! This material is much more flexible and lighter than bone which is perfect for these animals living without the weight of gravity.

Throughout history sharks have been portrayed as the monsters of the sea, a concept that science is continuously debunking. 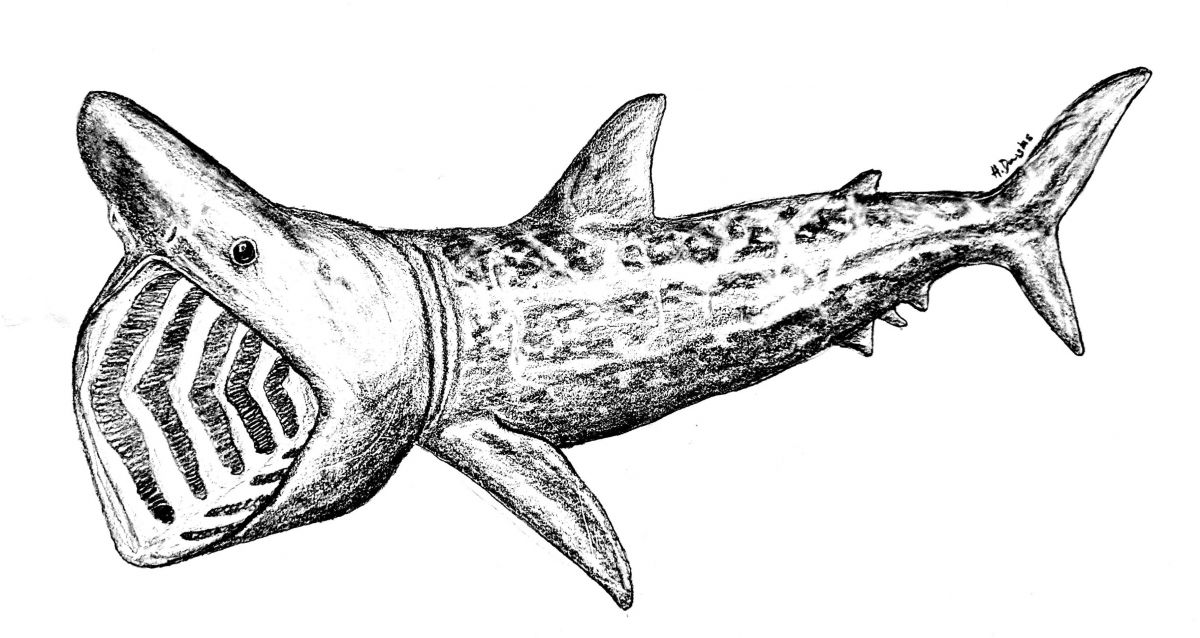 Basking sharks were named in 1765 as Cetorhinus maximus, roughly translated to the 'big-nosed sea monster'. Basking sharks are filter feeders, often swimming with their mouths agape, they filter plankton from the water.
They are very slow moving and like to bask in the sun in shallow water and are often seen in Irish waters around Spring and early Summer. To help understand the migration of these animals to be better able to understand and conserve these species, the Irish Basking Shark Group have tagged and mapped their travels. 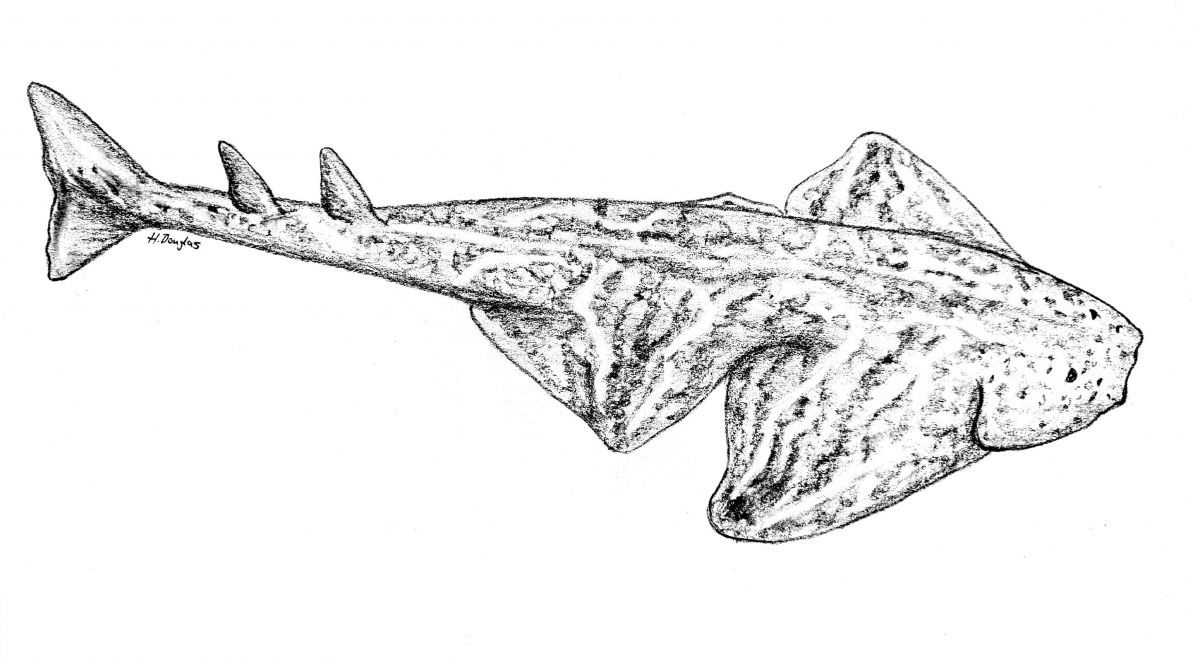 Remarkably, many sharks like the Angel Shark, Squatina squatina have the ability to sense electricity. They do this via small pores in their skin called the 'Ampullae of Lorenzini' which are able to detect the tiny electrical impulses of a fish breathing, moving or even its heartbeat from distances of over a kilometre! Angel sharks, often referred to as Monkfish have a distinctively angelic shape, with flattened, large fins appearing like the wings of an angel. They live on the seafloor in the coastal waters of Ireland and much like a cat are nocturnal, primarily active at night.

The intricate complexity of shark adaptations is particularly noticeable in the texture of their skin. Composed of miniscule, perfectly shaped overlapping scales, the skin of shark provides them with protection. Often shark scales have been compared to teeth due to their hard enamel structure. They are strong, but also due to their intricate shape, these scales reduce drag and allow water to glide past them so that the shark can swim more effortlessly and silently. This natural flawless design has been used as inspiration for new neoprene fabric designs

to help swimmers glide through the water. Although all sharks have this feature, the Leafscale Gulper Shark, Centrophorus squamosus, found in Ireland are specifically named due to the ornate leaf-shape of their scales.

The project 'Distribution and Abundance of Elasmobranch Fish in Tralee, Brandon and Dingle Bays' is part supported by the Irish Government and the European Maritime and Fisheries Fund as part of the EMFF Operational Programme for 2014 -2020.