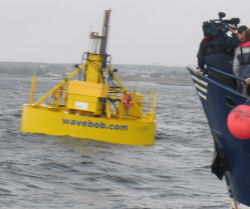 Ireland becomes a world leader in sustainable wave power technology this week as the first test site ever to have two prototype devices successfully producing electricity from the ocean on the same test site.

The Ocean Energy Test Site, which was established in Galway Bay by the Marine Institute and Sustainable Energy Ireland (SEI) as a facility for developers of wave energy devices in 2005.

It is situated on the North side of Galway Bay, 1 mile east of An Spideal.  It is 37 hectares in area and lies in 21-24 metres of water.

Wavebob (shown in the photo above) was the first scale prototype to be installed on the site in 2006, having already gone through a rigorous process of theoretical modelling followed by small-scale prototype testing in wave tanks. Some of this testing was performed at the Hydraulics and Maritime Research Centre, UCC. The quarter scale model was built in Belfast’s Harland & Wolfe Shipyard and was part-funded by SEI. The device is in two parts—a circular floating collar and a cylindrical float that rises and falls within the collar—generating electricity from the motion of a central column.

This was followed, on New Year’s Day 2007, by the half scale OE Buoy® (shown in title thumbnail on website front page) which employs a floating oscillating water column system to generate electricity.  This device converts wave energy into mechanical energy as water pumps air through a turbine.

“Now that these tests have proved successful, the next step is to investigate a site where full-scale prototypes can be tested,” said Dr. Peter Heffernan, CEO of the Marine Institute. “It is an honour for the Marine Institute and SEI to facilitate this pioneering work and our hats go off to the two companies—Ocean Energy and Wavebob—who have made the bold step into this new frontier. We will be giving them as much assistance as we possibly can to take Ireland forward as a world leader in wave power technology.”

Development of sustainable energy from the oceans is one of the pillars of the national programme Sea Change – A Marine Knowledge, Research and Innovation Strategy for Ireland 2007-2013 - which is managed by the Institute.