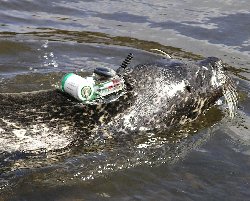 Five harbour seals were successfully tagged in Kenmare Bay, Co. Kerry last week by researchers from UCC, with assistance from the British Antarctic Survey, the National Parks and Wildlife Service and the National Trust. Seals are difficult animals to catch and tag, however the expedition, the final one of the project, was a huge success due to the efforts and dedication of the team, many of whom provided assistance on a voluntary basis.

This work is part of an exciting study on seals behaviour at sea off southwest Ireland which was initiated in early 2006. The project supported by the Marine Institute and the RDTI measure of the National Development Plan 2000 - 2006 is providing, for the first time ever, information on the movements and behaviour of seals in Irish waters. Dr. Michelle Cronin, Coastal Marine Resources Centre, UCC, together with world leading experts in marine mammal research from the Sea Mammal Research Unit in Scotland, are using sophisticated tags to study the seals offshore movements and behaviour.

The tags use a novel telemetry system (fast acquisition GPS) to obtain fine scale information on where the seals have travelled to offshore and mobile phone technology to relay the information back to a base phone. Dive-depth, temperature and conductivity sensors in the tags provide data on diving and haul-out behaviour. This enables the identification of foraging ‘hotspots’ and critical habitat of the harbour seal, essential for the effective conservation and management of the species which is protected under national and EU legislation.

The diet of the harbour seal is also being investigated by researchers at UCC as part of the study, involving the identification of prey remains in the stomach contents of dead seals washed ashore or by-caught in fishing nets and in the seals scat (faeces). Data on the seals diet, along with data from the tags, will provide a means of estimating what the seals are eating and where their main foraging effort is. Such information, as well as providing valuable information on the species foraging ecology, will prove useful in addressing contentious seal and fisheries interaction issues.

The seals are captured in custom made nets deployed from boats at speed around their rocky haul-out sites. The tags are attached to the seals fur, or pelage, using an epoxy resin and fall off after a few months when the seals shed their fur during the annual moult. All capture and handling procedures are carried out under license from the National Parks and Wildlife Service.

The recent tag deployment brings the total number of seals tagged to seventeen.The large amount of data collected via GPS and mobile phone technology are integrated into a GIS to help with data management and analysis and the most up-to-date web mapping techniques used to display and share the data with policy-makers and the broader Internet user community. A website dedicated to the project provides a means to view the seals movements and dive behaviour. For further information visit the Harbour Seals Tagging System Website.