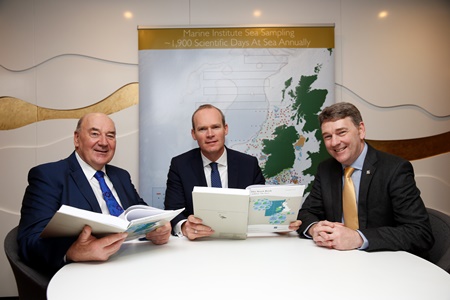 The Marine Institute's annual Stock Book will be used by Simon Coveney, Minister for Agriculture Food and the Marine at the Council of Ministers meeting taking place in Brussels this week (14-15 December), during which EU Fishing opportunities for 2016 will be set.

The Stock Book presents the results of the latest scientific advice on stocks where Ireland has a share of the EU Total Allowable catch (TAC). The Irish fishing fleet has access to 1.1 million tonnes of fish with an estimated landed value of €1.05 billion. Ireland's share of fishing opportunities represents 20% by tonnage and 19.5% by value.

Ireland's share of the TAC (the Irish quota) varies depending on the stock concerned. Ireland has 86% of Celtic sea herring, 69% of Boarfish, 37% of Nephrops (prawns), 21% of mackerel and 8% of anglerfish.

Several stocks in the west of Scotland, Irish sea and Celtic sea have been overfished in the past and now remain at very low levels, for example Irish Sea sole and cod.

Dr. Peter Heffernan, Marine Institute CEO said, "The information contained in the Stock Book represents a huge effort by the Marine Institute to produce the best possible scientific advice on the status of fish stocks in Irish waters. The Stock Book is a source of essential scientific data for Minister Coveney during negotiations at the EU Fisheries Council of Ministers meeting, where fishing quotas are set for the year ahead."

The Stock Book is an important source of information to a wide audience, including the fishing industry, marine scientists, managers, environmental NGO's, third level institutes, financial institutions and those with an interest in the status and management of marine fisheries resources in the waters around Ireland.

The Stock Book has been published by the Marine Institute since 1993 and has evolved considerably during that period. The majority of the scientific advice presented in the Stock Book is formulated by the International Council for the Exploration of the Seas (ICES). The majority of the ICES scientific advice is released in June each year to facilitate consultation with the fishing industry and managers on available fishing opportunities for the coming year.

The scientific advice outlined in the Stock Book was used in the Minister's annual Fisheries Sustainability Assessment, which was presented to the Oireachtas Committee on Agriculture, Food and the Marine on the 8th of December.