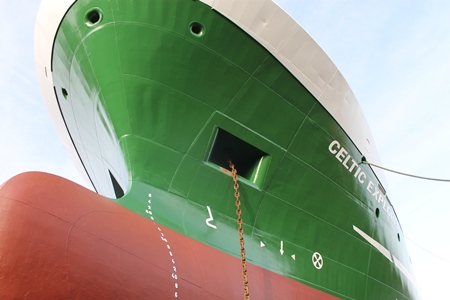 The R.V. Celtic Explorer is back in the water with a new suite of hydrographic and geophysical sonar systems, installed during an extensive refit in the A&P yard, Falmouth (UK) which began 29th of December under the supervision of P&O Maritime (Ireland) Ltd.

Adjustments were made to the hull to fit the Kongsberg EM302 multibeam system and an IXSEA Echoes sub bottom profiler. These systems will enhance the seabed mapping capabilities of the Celtic Explorer, with the EM302 echo sounder designed to perform mapping with high resolution and accuracy to depths of 6000 m. The sub bottom profiler can operate at depths of 6000m, to examine and profile surface bedrock layers and sediments. 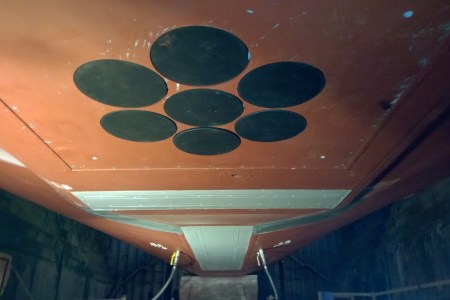 The vessel's drop keel has been fitted with an EM2040 multibeam system to carry out high resolution seabed mapping in shallower waters. The vessels positioning and motion reference systems were also upgraded to the highest standard to allow the vessel to operate the new equipment to the required accuracy.

The 2.5 yearly refit included major mechanical work such as the removal of the rudder for inspection and repair and overhaul of the stern thruster. The entire vessel was painted; cabins, laboratories and common areas were refitted; and minor repairs carried out as well as an overhaul of essential systems.

The Celtic Explorer will complete a survey in the North Sea and Baltic Sea before beginning sea trials of the new equipment in Irish waters in February. The capability of the new equipment will be tested in the deep waters off Ireland's West coast under the supervision of scientists from the Marine Institute's Advanced Mapping Services (AMS) team.

Once the new systems have been calibrated and tested, they will be used extensively this year, including on fisheries acoustic surveys where their water column capability will be used to study the aggregation morphology and vessel avoidance behaviour of pelagic fish species, as part of a new PhD study. The new systems will also be used to map the deep Atlantic seafloor during passage to and from Canada in April-May this year.

The Celtic Explorer will deliver an intensive program of activities in 2015 with a packed schedule to December 17th 2015. Beyond 2015 the systems will be used extensively to map the Celtic Sea, which will provide valuable data for the sustainable development of Ireland's fisheries as well as allowing Irish scientists the opportunity to play a pivotal role in future research opportunities in the deeper waters of the Atlantic Ocean.