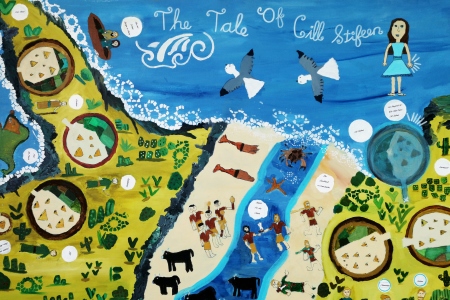 1 July 2020 - This week's Oceans of Learning series explores 'Art of the Ocean' with poetry, myths and legends, colouring and drawing activities as well as a range of video resources. The Marine Institute and partners are celebrating our world's shared ocean and our connection to the sea in a 10-week series, sharing news and offering online interactive activities, videos and downloadable resources on a new marine topic each week.

For centuries, the ocean has inspired writers, artists, filmmakers and photographers. From the infinite deep sea to the seashore, the ocean has always captured our hearts and minds with its magic and mystery. The sea has been the setting for exploration and adventure, voyages to the great unknown, and inspired stories of mythical beings and curious creatures.

The ocean has had a powerful presence in poetry, inspiring compelling imagery touching all the human senses and emotions. The Marine Institute's Odes to Our Ocean includes a selection of poems that celebrate the power of our seas and oceans, from well-known poets such as Ireland's beloved Seamus Heaney, and American poets Walt Whitman and Emily Dickinson.

The Marine Institute's Explorers Education Programme project Our Ocean – Marine Legends, Fairy Tales and Folklore in Ireland involved the use of art, storytelling and poetry to introduce primary school children to Ireland's rich maritime heritage and history, as well as researching their own local fables.

The sea has also been a source of inspiration and fascination for artists, with many artworks over time featuring ships, seascapes and sea life. The Explorers Education Programme's 'Sea How to Draw' series with popular cartoonist and author Dr John Joyce, will show you how to create characters, marine animals, research vessels, surfers and divers. Colour in the lighthouses located around the coast of Ireland, with a colouring book from the Commissioners of Irish Lights.

As part of the BlueFish project, a series of watercolour illustrations were produced that capture the importance of the ocean to coastal communities in Ireland and Wales. Through engaging with coastal communities using art, BlueFish links knowledge and understanding of the marine resources and the potential impacts of climate change on the Irish and Celtic Sea ecosystem.

Filmmakers have depicted the power and beauty of the ocean on screen, and have helped us to discover more about the sea by capturing marine life on camera. Explore films that showcase Ireland's marine life and the value of our ocean, including the three-part television series Taoide which explores the power and mystery of the Earth's tide. The documentary Ireland's Deep Atlantic, produced by Sea Fever Productions, sees filmmaker Ken O'Sullivan embark on a series of voyages in the North Atlantic in search of blue whales, sharks and deep-water coral reefs.

As part of the Marine Institute's Oceans of Learning series, enter the 'Sea to Me' competition, by sharing 'what the sea means to you' on social media using the hashtag #SeaToMe. This week, to celebrate the ocean as a source of inspiration, get creative and draw a picture, create an artwork, or write your own poem or quote about the sea. The #SeaToMe prize this week is a Galway Getaway, which includes a boat trip with Galway Bay Boat Tours, a guided tour of Galway City Museum and an overnight stay in the Connacht Hotel.

Oceans of Learning offers downloadable resource such as fact sheets, a quiz and posters on Ireland's shipping sector. To access the resources visit Art of the Ocean.