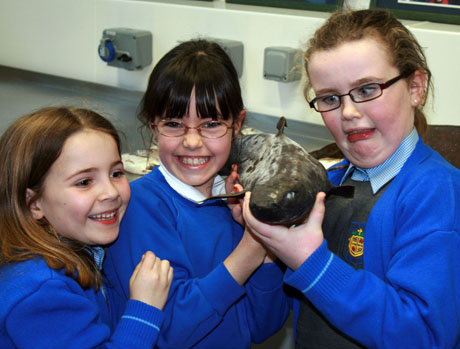 Ticket sales from the pantomime The Wizard of Oz, a joint production between the Marine Institute and the Scoil Mhuire local primary school in Oranmore, Co. Galway, were divided between Cancer Care West and the Galway Lifeboat last week in Galway (15th January). Production costs of The Wizard of Oz were sponsored by a number of local organisations and businesses, including Galway Sailing Club.  Scoil Mhuire also received a donation from the proceedings of the show.

To celebrate both the handing over of the cheques to the Galway Lifeboat and Cancer Care West, and as a “thank you” to the children and parents who made The Wizard of Ozsuch a success, the young actors were treated to a tour of the Marine Institute’s “wet lab”, and an introduction to some of the denizens of the deep lurking there.

Speaking on behalf of the Institute staff, Dr. Peter Heffernan CEO said the Institute had always received a warm welcome from the people of Oranmore. “It is our great pleasure to give something back to the local community in this way, and I salute the staff, parents, teachers and pupils who gave so freely of their spare time to make this production a success in support of such worthy causes,” he said. “I hope that The Wizard of Oz will be the first of many such productions over the years”

Responding for Scoil Mhuire, Deputy Principal Edel Carney said that the positive experience of participating in The Wizard of Oz would always be remembered by those who took part. “I hope that the Yellow Brick Road will always run from Scoil Mhuire in Oranmore to the Marine Institute,” she said.

Looking down the microscope at the Marine Institute

Receiving a €3,300 cheque for the Royal National Lifeboat Institution at the event was Mr. Paul Carey, while Mr. Dave O’Donnell received a second €3,300 cheque on behalf of  Cancer Care West.

The Wizard of Oz was produced and directed by Mr. Wayne Griffin of the Marine Institute and starred a number of its staff in leading roles.