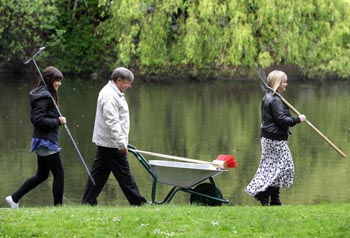 The protection of Ireland’s native plants and animals should be part of our strategy for economic recovery, according to the National Biodiversity Forum, which is chaired by the Marine Institute's Dr Ken Whelan.

Staging a photocall to mark International Day for Biodiversity Day on Friday 22nd May, the National Biodiversity Forum said that damage to native plants and animals could have very serious implications for important economic sectors, such as agriculture, forestry and tourism.

The theme for this year’s International Day for Biodiversity is invasive alien species, which are non-native plants and animals that can damage our eco-system.  The Forum said that it was the responsibility of everyone - from the gardener to the Government - to make sure that Ireland’s native species were not threatened or damaged.

According to the Chairperson of the Forum, Dr Ken Whelan, who is also Director of Aquaculture and Catchment Management Services at the Marine Institute, “In all of our plans for economic recovery, the role that our biodiversity plays should not be underestimated. The threat posed by invasive species is very significant.  Already, non-native species – such as African curly leaved pondweed and New Zealand Pigmyweed – are clogging up lakes and canals. Some bays of  Lough Corrib has been impacted heavily and intensive efforts to remove and control the weed, which are currently underway, will need to be intensified if the lake is to remain attractive for fly-fishing.  Such invasions of non native species could have a very negative impact on local economies that rely on tourism generated from our lakes and waterways.

“Our natural resources and ecosystems underpin our economy: Biodiversity directly supports diverse industries such as pharmaceuticals, pulp and paper, as well as construction and waste treatment.  It also provides society with free 'ecosystem services' such as water purification, climate regulation and disease regulation.  If we tamper with our biodiversity – by introducing non-native species which can kill off important native species – we put our economy at risk.  After all, there are no economies without environments but there are environments without economies.   Invasive species are one of the greatest threats to biodiversity globally after habitat destruction and climate change.  In Ireland invasive species are impacting on woodlands, agricultural land, coastal habitats, lakes and rivers. Everyone from gardener to Government has to take responsibility for protecting our native plans and animals"

The following are some of the key actions which can be taken:

Dr Whelan said, “Over the past ten years invasive species have made serous in-roads into Ireland and have caused irreparable damage to our terrestrial and aquatic environments.  The cost to the taxpayer of such invasive species is increasingly evident and we must redouble our efforts not only to deal with the eradication of species already recorded in Ireland but to ensure that biosecurity levels are significantly increased to ensure that no further exotic animals or plants reach our shores."

“If everyone comes to value the importance of our biodiversity – including our native species – we can help create a more sustainable economy, while also protecting our environment and overall well-being,” added Dr Whelan.