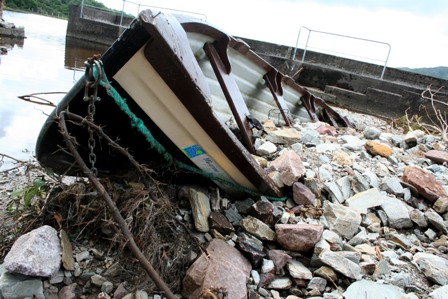 On 2nd July 2009, an unseasonable storm with record rainfall caused major flooding around the Marine Institute’s facility on the Burrishoole catchment at Newport, Co. Mayo. This “brings home”, in the most literal sense, the challenges we are likely to face  as a consequence of global warming and projected changes in the climate system. During the previous month, intense rainfall was also experienced at a number of other locations around Ireland. For example, over 40 millimetres of rain was recorded over a period of 4 hours in Donegal with some areas likely to have experienced over 60 millimetres, equivalent to the average monthly rainfall for June at Malin Head. The impacts of these extreme events have the potential to cause significant damage as witnessed in Newport and Gweedore, where bridges were washed out, roads were torn up, buildings damaged and a number of land slides were recorded.

The latest Intergovernmental Panel on Climate Change report was released in 2007 (see http://www.ipcc.ch/ ). It attributes most of the increase in global temperatures experienced since the beginning of the twentieth century to increased levels of “greenhouse gases”, consisting mainly of atmospheric carbon dioxide (CO2), brought about by human activities. Based on a global network of measurement sites, the current level of atmospheric CO2 (at 380 parts per million volume) is now a third higher than it was before the Industrial Revolution and quite likely at a record level for the last 20 million years. This relatively recent increase in atmospheric CO2 is primarily composed of ‘old carbon’ only released through the burning of fossil fuels.

Of greater concern has been the forecast that the level of atmospheric CO2 will double by the year 2100, which in turn could bring about a rise in global temperature of between 1.8 and 4 degrees centigrade. Such changes will have significant global impacts, but in particular, will affect the temperature, salinity and dissolved oxygen content of marine and freshwater ecosystems. These changes will have significant knock-on consequences for migratory fish, such as salmon, trout and eels, which have already displayed a decline in Irish rivers, attributed to environmental changes and over fishing.

To address some of these issues, a team of scientists from the National University of Ireland Maynooth, Trinity College, Dublin and the Marine Institute have come together to study the effects of climate change in the Burrishoole catchment. This facility, which was established by the Salmon Research Trust in 1955, now boasts a number of unique long-term datasets (up to 50 years in some cases) on air and water temperature, rainfall and the migration of wild salmon and maturing European Eel, which provide an ideal opportunity to study the long term effects of climate change. A network of modern monitoring stations, collecting a variety of information to a very high degree of accuracy, was installed in the catchment over the last 10 years, which has greatly augmented the existing monitoring network.  The Marine Institute has also collaborated with Met Eireann since the 1960s by hosting a weather station at Burrishoole.

Preliminary results from this project indicate that temperatures in the Burrishoole catchment have increased over the time since observations began. 1997 was the warmest year on record in the Burrishoole and since 1988, no year has recorded a temperature below that of the 1961-1990 average. Burrishoole records also show significant changes in rainfall over the period of the data, with increasing amounts and duration of heavy rainfall events during winter months. And while no significant changes have been found in summer rainfall over the same period, the recent extreme event in the Burrishoole catchment recorded some 52 millimetres (2 inches) of rain over just two hours. The water level in one of the experimental streams  rose from less than 1 metre to over five metres during the same period. Such extreme events, which are normally considered to occur less than once in 250 years, have the potential to cause extreme damage and appear to be on the increase. Their occurrence reinforces what the science of climate change is telling us since, as the world warms, the increased rates of evaporation from the oceans results in more water in the atmosphere, which in turn can lead to more intense rainfall events.

Present results indicate that warming of between 2 and 4oC will be experienced in all seasons of the year in the Burrishoole Catchment by the end of the century, with the greatest increases in the autumn. Changes in rainfall are also projected, with winter increases of 10-20% and summer decreases of between 8-18%. However, even if decreased overall summer rainfall is predicted, the chances of extreme summer rainfall events over short periods of time, like the one we have just witnessed, will increase, with associated flooding.

Increased air temperatures will in turn drive up the temperature of the water in streams within the catchment, which is likely to have a negative effect on the survival rates of salmon eggs and parr. Higher summer stream water temperatures, resulting in lower oxygen levels, will also have negative impacts on fish life. In addition, extreme rainfall events and flooding could do serious damage to fish stocks, if they happen during critical periods in the life history of the stock, such as washing away spawning beds or interfering with upward migration.

This is why it is critical that we continue to monitor our marine and freshwater ecosystems, maintain our data series and build the necessary capacity to understand the effects of climate change on individual river catchments, our coastal regions and local economies. The unique and pristine location of the Burrishoole catchment and the long-term data sets collected by the Marine Institute at this location, ensures that Ireland can make a valuable contribution to the development of accurate climate change models and forecasting systems at a European and global level.  The current research being carried out at Burrishoole seeks to address the gaps in our knowledge with a view to developing strategies to ensure the continued survival of salmon, a species that has both an intrinsic ecological and cultural value to Ireland, in addition to its economic importance. The findings from this research will be of relevance to the management of catchments not just in Ireland, but throughout the world.