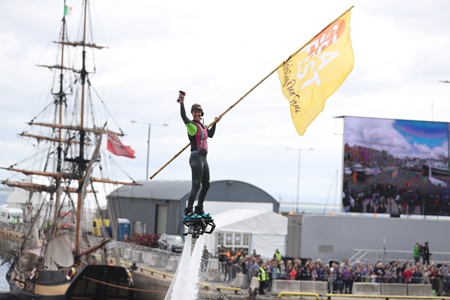 SeaFest 2017 has been nominated for two awards in The Event Industry Awards 2018. Ireland's national maritime festival, SeaFest, has been shortlisted for 'Best Live Event' and 'Best Cultural Event.'

The Event Industry Awards is the premier awards ceremony for the event sector in Ireland, and showcases the very highest standards in Ireland's event industry. SeaFest 2017 is nominated alongside some of Ireland's most outstanding events and festivals.

Sinéad Coyne, Communications Manager for SeaFest said, "We are really delighted and honoured to be shortlisted for two categories in this year's Event industry Awards alongside so many well-established companies. Congratulations to everyone involved and we look forward to the awards ceremony on July 20th, at Citywest Hotel, Dublin."

All entertainment, events and activities at SeaFest 2017 were free and 101,113 visitors flocked to Galway Harbour to enjoy a host of activities and entertainment on and around the water. In addition, the festival generated €6.3 million in direct income for Galway's tourism industry.

Global event specialists, Arcana, were appointed event managers for SeaFest 2017 and worked with the Marine Institute and over 20 local, regional and national organisations and agencies to stage the three-day festival.

Don't worry if you missed SeaFest 2017 though. This year's festival, taking place in Galway Harbour from 29th June to 1st July, is shaping up to be another spectacular three-day event.