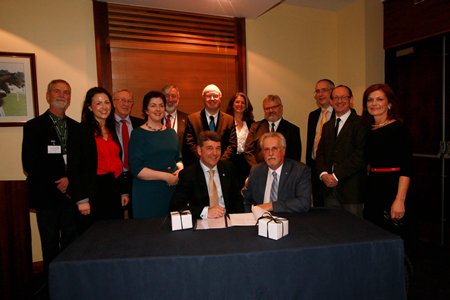 SmartBay Ireland has entered into a trans-Atlantic collaboration agreement with the Fisheries and Marine Institute of Memorial University of Newfoundland in St. John's, Newfoundland and Labrador, Canada, Dublin City University and the Marine Institute Ireland. The Memorandum of Understanding was signed at a reception hosted by the Canadian Embassy during a recent Canadian Trade Mission to Ireland.

Welcoming the agreement Dr. Peter Heffernan, CEO Marine Institute Ireland said, "This is a tangible example of the type of trans-Atlantic collaboration envisaged in the Galway Statement. I am especially pleased to build on the strong partnerships established with our colleagues in Newfoundland and to see the exciting collaborative opportunities in sensor technology test and demonstration for our linked SmartBay initiatives."

The agreement is designed to further consolidate and develop the partnership that exists between the Marine Institutes of Newfoundland and Labrador and Ireland and the SmartBay infrastructures.

Glenn Blackwood, vice-president of Memorial University (Marine Institute) said, "Since the establishment of our Marine Institute, we have focused on building meaningful relationships with industry partners. This MOU solidifies our commitment to further strengthen ongoing links between SmartBay Newfoundland and Labrador and SmartBay Ireland and allows for increased collaboration on the work that both jurisdictions are conducting in the ocean industry."

The key aims of the agreement are the sharing of assets, capacity and capability in a joint mission to provide access by scientists, innovators and entrepreneurs to both SmartBay test and validation infrastructures currently deployed in the North Atlantic.

Dr. Fiona Regan, Director, Marine and Environmental Sensing Technology Hub (MESTECH) and SmartBay Ireland Principal Investigator added: "This exciting collaboration will enable the establishment of joint projects in the area of ocean observation with our academic and industry partners from Ireland and Canada, sharing expertise and infrastructure."

These objectives will be achieved through a range of activities including: joint industry and academic research projects, outreach and education programmes and the identification of opportunities to leverage funding for joint research projects and the expansion of collaborative arrangements to include other jurisdictions bordering the North Atlantic.

John Breslin, General Manager SmartBay Ireland said: "We are delighted to be working with our Canadian partners to utilise the infrastructure and expertise within both SmartBay facilities to identify and develop sensor-driven decision support tools to address specific industry needs within the Oil and Gas, Aquaculture and Telecommunications sectors."

This agreement to work together and co-operate is based on a common vision and cultural appreciation of the societal and economic value of the ocean and is another step toward the utilisation of the jurisdictions' joint facilities and expertise to deliver projects of scientific and economic benefit.

Ron Newhook, Director of the Marine Institute of Newfoundland and Labrador's Office of Research and Development and Randy Gillespie, Director of the Institute's Centre for Applied Ocean Technology were part of the recent Newfoundland and Labrador Trade Mission to Ireland and attended the MOU signing. Mr. Newhook adds, "Capturing the spirit of the Galway Declaration, this new MOU renews and strengthens trans-Atlantic collaborations between industry, governments, academia and NGO's. Together, SmartBay Ireland and the Marine Institute's Centre for Applied Ocean Technology, which currently operates SmartBay Newfoundland and SmartAtlantic, will lead the way in the development and implementation of a sustainable observatory which will provide information to support a safe and sustainable ocean industry in the broad North Atlantic."

SmartBay Ireland is responsible for managing Irelands National Marine Research Test and Demonstration Facility. The project has been funded under the Higher Education Authority of Irelands PRTLI V Programme for research in third level institutions. Dublin City University is the lead academic institution and the project partners include NUIM, NUIG, UCD, IBM, Intel and the Marine Institute.

SmartBay Ireland is developing a network of partnerships with Irish and overseas industries, third level research institutes and international centres of excellence.

Facilities can be accessed by industry and universities alike and include a licenced ¼ scale test site, a network of sensors, buoys, and by Q1 2015 a cabled subsea observatory funded by Science Foundation Ireland. These facilities will provide an international test bed to trial and validate new technologies, sensors and solutions in a real-world marine environment.

SmartBay NL (www.SmartBay.ca) is an applied ocean observatory that was established in September 2006 and has been in continuous operation since. SmartBay infrastructure includes meteorological/oceanographic instruments strategically situated around the island of Newfoundland providing important weather and sea state information to mariners.

This information is directly accessible via the web in near real-time and is used routinely in support of marine operations. Users of SmartBay range from local fishers to foreign-based shipping firms to the research and development and ocean technology communities.

First established in Placentia Bay, Newfoundland, the SmartBay network has since been expanded around the Island of Newfoundland and to the port of Halifax, Nova Scotia. The network will be further extended to include the port of Saint John, New Brunswick in early 2015.