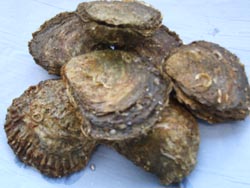 Oyster mortality reported in Irish and French oyster production areas over the summer has been resolved and trade has been re-established.

The Marine Institute received notification of mortalities in pacific oysters (Crassostrea Gigas) in 15 Irish bays between June and August 2009. Analysis of samples from these and other bays is now almost complete.

The oyster herpes virus, OsHV1 was identified in 14 of 15 sites affected by mortalities. In all 14 sites, oysters that had been imported from France in either 2009 or 2008 were present. Oyster samples were also taken from six bays where no oyster mortalities occurred and analysis showed that the herpes virus was not present on those sites.

Under new fish health regulations, the Marine Institute must be notified in advance of all imports, exports and movements of aquaculture animals for on-growing within Ireland. If you are planning to move shellfish, please contact the Marine Institute by emailing notification@marine.ie, fax 091 387201 or call 091 387200.

The EU Commission are looking closely at the oyster mortality situation which occurred in Ireland, France and Jersey this year, and it is possible that legislative provisions will be put in place shortly to contain the spread of this syndrome.