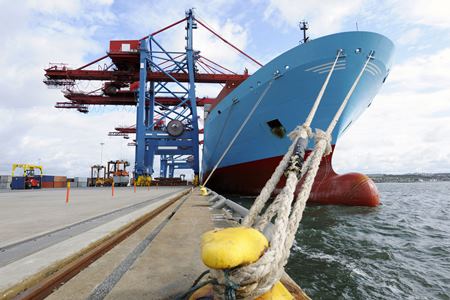 Ireland's ports and shipping services play an important role as enablers of economic growth. In 2014, port volume increases of more than 2%, as measured by the iShip Index*, tracking Ireland's economic recovery.

Commenting on the 2014 traffic figures, Liam Lacey, Director of the Irish Maritime Development Office said, "Irish ports coped comfortably with the growth recorded in 2014. Total volumes have not yet reached the levels recorded prior to the economic downturn in 2007 and at 914 points, port traffic remains more than 12% behind the high-water mark of 1,042 points recorded in 2007. As a result of the volume gains recorded in recent years and in anticipation of future growth, some of our major ports are now preparing to add capacity and in some cases, development plans are at an advanced stage".

Unitised trade, which includes RoRo and LoLo traffic grew strongly, reflecting both improved export performance and increased consumption in the domestic economy. LoLo traffic grew by 9% to over 793,000 teu, while RoRo traffic was up by 7%, with total volumes exceeding 943,000 vehicles. Total bulk traffic, which includes dry bulk, liquid bulk and break bulk cargoes fell by 2%. This volume decline is largely attributable to the reduced demand for imported fuels and animal feed, resulting from unusually mild weather conditions in 2014.

The growth in traffic was not evenly distributed across the port network. Dublin Port's LoLo and RoRo volumes were up by 9% and 8% respectively and Dublin remains the main port for unitised trade, with 54% of the LoLo market and 49% of the RoRo market. LoLo traffic also grew strongly through the Port of Cork and was up 12% on the previous year, while Rosslare Europort recorded a 1% increase in its RoRo volumes.

Bulk cargoes, which remain concentrated in Shannon Foynes, Cork and Dublin, with 37%, 25% and 20% of the market respectively, increased strongly through Greenore, Drogheda, Galway and Waterford. With the abolition of milk quotas early in 2015, agricultural output is expected to generate spin-off opportunities for regional ports to capitalise on increased agricultural output, as evidenced by the recent decision of Glanbia plc to invest €157mn in a major new dairy facility near Waterford Port.

Ireland's trading performance is affected by international economic influences. Growth in the global economy remained sluggish at 2.6% in 2014 and was lower than initially expected, continuing a pattern of disappointing outturns over the past several years. Within Europe, the competitive realignment brought about by the lower-valued euro, the positive effects of lower oil prices and the strengthening in overall German economic activity have assuaged concerns about recession in Europe. In the context of these macro-economic factors and buoyed by growth in the United Kingdom and the United States, our two most important trading partners, Ireland's GDP grew by 4.8%, compared to the 0.2% growth in 2013. Exports increased by 2.4% to €89bn, while imports grew strongly by 7.1% to €53.6bn. Although the Irish economy has not yet returned to the levels of output previously recorded, there is evidence of steady progress. Our ports and shipping services are playing their part by facilitating international trade and supporting the export led recovery.

In the passenger traffic sector, Irish shipping contributed to the 9%** growth in annual tourist visitors by adding capacity on established routes and introducing new services in and out of the Republic of Ireland. Irish Ferries opened a new service between Dublin and Cherbourg and also increased capacity on the Dublin – Holyhead route, with the introduction of the Epsilon. Stena Line introduced a superfast service on the Dublin – Holyhead route and has established a presence on the Rosslare-Cherbourg route through the acquisition of Celtic Link. Overall, 4.5 million passengers travelled to and from Ireland by ferry in 2014. During 2014, 238 cruise ships made port calls to the island, bringing approximately 396,391 cruise passengers and crew to Ireland. Dublin Port remains the busiest cruise port in the Republic, followed by the Port of Cork.

Volume 12 of the Irish Maritime Transport Economist is available to download on this link: http://viewer.zmags.com/publication/0a7998ad