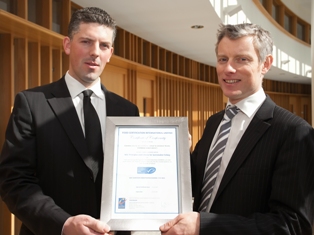 Herring from the Celtic Sea has been certified as sustainable by the Marine Stewardship Council (MSC) and can now bear the blue MSC ecolabel, advertising its status as being sourced from a certified sustainable fishery.  The certificate was awarded at a meeting of the Celtic Sea Herring Management Advisory Committee (CSHMAC) at the Marine Institute, Galway (Wednesday, 4th April 2012).  Dr. Maurice Clarke, Fisheries Scientist at the Marine Institute and Scientific Advisor to the Committee, presented the MSC Certificate to Mr. Gavin Power, Chairman of CSHMAC.

Mr Power stated, “The Committee is delighted to receive MSC certification for the Celtic Sea Herring Fishery. After many years of committed work the stock has recovered well and the fishery is now operating at a sustainable level. Sacrifices have been made along the way but, underpinned by sound scientific advice and support by the Marine Institute, our management approach has succeeded in delivering tangible results. In this regard the MSC certificate is also a symbol of a successful industry-science partnership. What is important now is that the award of MSC certification will deliver a renewed focus on future improvements in management and improved responsibility, aimed at ensuring a profitable and sustainable fishery for many years to come.”

This involved a learning curve for fishermen working with scientists according to Liam O’ Driscoll, Herring fisherman and a member of the CSHMAC. “We learned to respect each other, and to trust each other. It was hard for fishermen to accept some of the draconian cuts in the early days but we’ve lived long enough to see the fruits of our labour and hopefully we’ll see further benefits from that. It was the fishermen themselves who proposed to close the fishing grounds to protect the fish. This was a major step forward that wouldn’t have happened previously.”

Those early initiatives by the fishing industry were the cornerstone of rebuilding the herring stock and the successful management of the fishery according to Dr. Maurice Clarke. “The relationship between science and industry was often fraught - there were strong differences of opinion, but eventually a common approach evolved and the CSHMAC implemented a rebuilding plan. The plan involved painful quota cuts, but paid off in the long term as quotas have increased and the stock recovered.”

Food Certification International, the independent Certifier described the fishery as ‘clean and selective’ in their assessment. Herring school in single species groups in mid-water meaning low by-catch and minimal contact between fishing gear and the seabed. The report concluded that the establishment of the Celtic Sea Herring Management Advisory Committee (CSHMAC), a national multi stakeholder initiative, and its partnership with the Department  of Agriculture, Food and the Marine resulted in a management approach  that “led to direct improvements” in the herring stock.

Claire Pescod, UK and Ireland Fisheries Outreach Manager said: “On behalf of the MSC, I would like to congratulate the CSHMAC on their certification. It is through the hard work and commitment of all members of the CSHMAC that herring stocks have improved and that products from this fishery are now able to bear the distinctive blue MSC ecolabel.  There is a huge demand for MSC certified herring, particularly in Northern Europe with 1 in 8 MSC certified products being herring based. The work the CSHMAC members have implemented on Celtic Sea herring stock management really demonstrates their commitment to sustainable fisheries management.”