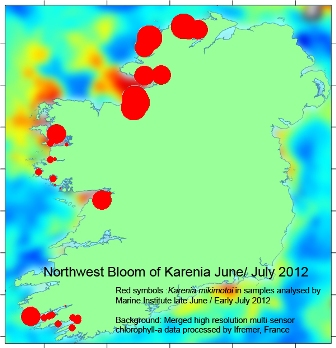 Seawater samples submitted to Marine Institute in the past few weeks have shown the presence of a species of Phytoplankton that can harm marine animals, and some mortality has been reported among oysters, cockles and lugworms from the Mayo to Donegal coastal regions.

Analysis carried out at the Marine Institute phytoplankton lab has indicated that there is an ongoing bloom in the area of Karenia mikimotoi which is a phytoplankton of the dinoflagellate group that produces dense blooms and often results in similar mortality of marine organisms. The bloom is most likely to originate offshore and several previous occurrences of this species have been recorded in Ireland over the years, most significantly the bloom in 2005 which extended all along the west coast. That bloom lasted through the months of June and July and resulted in extensive mortalities of wild intertidal and sub-tidal invertebrates and fish. There were also reports of losses of farmed shellfish in west coast at that time.

“The species of phytoplankton that is causing this unusual mortality is quite common in the summer months around the coast of Ireland. The species can cause mortalities in shellfish and finfish because it contains a toxic irritant that results in damage to the gills of shellfish, fish and invertebrates. This, coupled with reduced oxygen levels during the decaying bloom can result in extensive mortalities over large areas of the coastline, as we reported during the 2005 event,” explained Mr. Joe Silke of the Marine Institute Phytoplankton and Biotoxin Unit.

The current bloom has shown moderate levels between half a million cells to 1.5 million cells per litre in the Donegal bay area. A second bloom is also evident from satellite images in the Belmullet to Clew Bay area where reports of dead shellfish and lugworms have been reported by the public. Lower levels have been observed along the Galway and North Clare coast and also in Kenmare, Bantry and Dunmanus Bays.

“These blooms are part of the natural cycle of phytoplankton in the sea, and originate offshore. As they are pushed to the coast by oceanic and tidal currents they accumulate to dense levels that can even discolour the seawater in what are often called ‘Red Tide’ events.  Just as certain land plants contain toxins and irritants, so do marine algae and the accumulation of these coastal blooms are not associated with pollution or any man induced activity,” said Mr Silke.

The duration of the current bloom is difficult to predict, it may subside quickly to be replaced by the more typical mixed summer algal community, or it may continue over the next month or so as was the case in 2005. The Marine Institute is continuing to monitor samples from the region and all results are on the website immediately after analysis on www.marine.ie/habs .