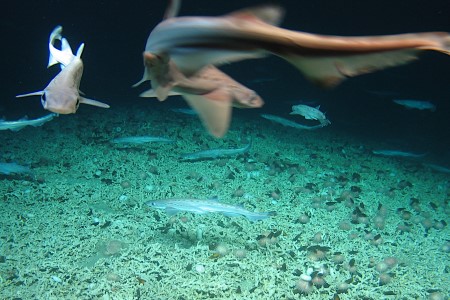 A team of marine scientists have discovered a very rare shark nursery, 200 miles west of Ireland while investigating Ireland’s deep ocean territory. The announcement was made at the INFOMAR Seabed Mapping Seminar in Kinsale today, where video highlights were debuted of this rare occurrence, discovered during the recent “SeaRover” survey by the Marine Institute’s remotely operated vehicle (ROV) Holland 1 deployed onboard the ILV Granuaile. The INFOMAR Programme is a Government of Ireland initiative, funded by Department of Communications, Climate Action and Environment and is a deliverable under Project 2040, Ireland’s National Development Plan.

Speaking at the event David O’Sullivan, of INFOMAR and Chief Scientist on the SeaRover survey (Sensitive Ecosystem Analysis and ROV Exploration of Reef habitat) said: ‘We are delighted to report the discovery of a rare shark nursery on a scale not previously documented in Irish waters. This discovery shows the significance of documenting sensitive marine habitats, and will give us a better understanding of the biology of these beautiful animals and their ecosystem function in Ireland’s Biologically Sensitive Area.”

Speaking at the INFOMAR Seminar, Koen Verbruggen, GSI Director said “We are delighted that this discovery has been unveiled at todays’ event, demonstrating the importance of mapping our seabed habitats in understanding and managing our vast and valued ocean resources.  Our data and team continue to make significant contributions to harnessing our ocean wealth.”

A large school of Blackmouth catshark (Galeus melastomus), abundant in the northeast Atlantic were present at the site, and it is likely the eggs are of this species. A second more unusual and solitary species, the Sailfin roughshark (Oxynotus paradoxus) was also observed. “Both species are of scientific interest as Ireland has an obligation to monitor deepwater sharks under the Marine Strategy Framework Directive”, said Maurice Clarke from the Fisheries Ecosystem Advisory Services at the Marine Institute.

The Sailfin roughshark is listed as ‘Near Threatened’ by the International Union for Conservation of Nature meaning it may be considered threatened with extinction in the near future. The species grows up to a length of 1.2 m and is usually observed moving slowly with deep water currents feeding on small benthic invertebrates. The individual may have been feeding on the eggs although this was not observed by the science team.

“No pups were obvious at the site and it is believed that the adult sharks might be utilising degraded coral reef and exposed carbonate rock on which to lay their eggs. A healthy coral reef in the vicinity, may act as a refuge for the juvenile shark pups once they hatch. It is anticipated that further study of the site will answer some important scientific questions on the biology and ecology of deep water sharks in Irish waters,” explained David O’Sullivan.

The shark nursery was observed within one of six offshore Special Areas of Conservation (SACs) in Irish waters designated under the EU Habitats Directive for Annex 1 reefs.  The SACs host a diverse range of marine animals including sea fans, sponges, worms, starfish, crustaceans and a variety of fish species. Many of these species were apparent in the newly discovered nursery highlighting the importance of conserving key areas of our oceans to sustain and support marine biodiversity.

“Our key objective is to assess, protect and monitor Ireland’s rich offshore marine biodiversity so we can begin to manage our marine resources effectively. Without knowledge of what lives in our seas we are at risk of never fully understanding and appreciating Ireland’s marine environment”, Dr Yvonne Leahy (NPWS) explained.

Scientific expertise and the high resolution deep sea mapping dataset used in survey planning and design was provided by the national seabed mapping programme INFOMAR.  This enabled targeting potential locations of reef habitat for this survey, in the form of seabed features including submarine canyons and seabed mounds, frequently host to cold water coral reefs and associated habitats in Ireland’s rich offshore waters.

The survey called ‘SeaRover’ is the second of three surveys commissioned and jointly funded by the Irish Government and the EU’s European Maritime and Fisheries Fund. ‘The cross government initiative is supported by the Department of Agriculture, Food and Marine (DAFM), Department of Culture, Heritage and Gaeltacht (DCHG), and Department of Communications, Climate Action and Environment as part of the Marine Institute’s implementation of the Marine Biodiversity scheme.  Survey operations were coordinated and led by the INFOMAR programme which is a joint venture between the Geological Survey Ireland and the Marine Institute, funded by the Department of Communications, Climate Action and Environment. Scientists from the Marine Institute, National Parks and Wildlife Service, National University of Ireland, Galway, Plymouth University and Aquafact participated in the survey which this year extended coverage to include Ireland’s farthest offshore area within its Exclusive Economic Zone at the Rockall Bank.

The EMFF Marine Biodiversity Scheme aims to promote good fisheries and aquaculture management and protect biodiversity in marine habitats to support Common Fisheries Policy implementation and compliance with the Habitats and Birds Directives (Natura 2000) and the Marine Strategy Framework Directive. Further information on individual projects and the scheme itself at https://emff.marine.ie/.

INFOMAR is Ireland’s national marine mapping programme and a global leader in this regard. It is funded by DCCAE and delivered by Geological Survey Ireland (GSI) and the Marine Institute. It follows on from the GSI managed Irish National Seabed Survey and is scheduled to complete the mapping of all Irish waters in 2026, when Ireland will be the first country in the world to have mapped 100% of their marine territory.

This is the second of three surveys proposed under SeaRover (Sensitive Ecosystem Assessment and ROV Exploration of Reef) SeaRover Survey Team: