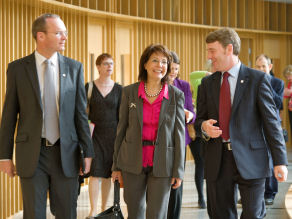 The Galway Declaration was endorsed by over 500 leading marine scientists, policy makers, and representatives of the marine sector from all corners of the European Union at the EurOCEAN Conference on Marine Science and Ocean Technology in Galway on the 13th May 2004 (see: http://ec.europa.eu/research/press/2007/maritime-briefing/pdf/24-galway… )