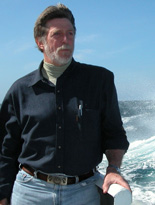 New ways of exploring the deep oceans, that can shed light on rapid climate change, investigate the consequences of erupting underwater volcanoes and provide new technologies that may help humankind explore distant planets, are just some of the benefits of launching a new era of web-enabled human interaction with the oceans, according to US underwater explorer and visionary Prof. John Delaney who was speaking at the Royal Irish Academy in Dublin last night (30th January).

According to Professor Delaney’s lecture – Ocean Sciences: At the Cutting Edge of an Environmental Renaissance – marine science is about to take a quantum leap in its ability to gather information about the ocean as profound as the first explorations by the ancient Phoenicians or the development and utilisation of satellite technology – by placing entire networks of robot underwater data gathering systems in the deep ocean.

“The development of undersea observatories, linked by fibre optic cables that can provide both electrical power and the ability to gather and transmit information from the deep seas worldwide over the Internet opens up a window on the oceans that we can share with the whole world,” said Professor Delaney. “A host of new technologies involving autonomous underwater vehicles (AUVs), remote genetic analysis and the instantaneous transmission of large amounts of data will also allow us to deploy robot data gathering devices to any point in the ocean where there are phenomena we wish to observe – be it an underwater earthquake, a deep ocean fishery, or a migrating pod of whales.”

Professor Delaney is here in Ireland, not only to give a series of guest lectures at the Royal Irish Academy, Dublin, in Galway and at the Marine Institute itself, but also to advise the Marine Institute on its own cabled underwater observatory project SMARTBAY, which will be installed over the next three years in Galway Bay. This in turn will lead to CELTNET, a more ambitious project by the Marine Institute and its European partners, to install cabled underwater observatories in the deep ocean off the west coast of Ireland, as part of an even bigger system spanning Europe from the Arctic, through the Mediterranean to the Black Sea.

The importance of underwater observatories, as early warning systems for environmental and geological incidents as well as unique providers of information on the ocean, has been emphasized by the European Commission in its recent Maritime Policy papers and in Ireland’s own response to the EU Consultation process on this policy.

“Just as we on the west coast of America are affected by the oceanic and weather systems from the Pacific, so Ireland is affected by those of the Atlantic,” said Professor Delaney. “We are both on the western edge of large continental landmasses buffeted by vast and unexplored oceans.”

From his own experience in the field, Prof. Delaney is convinced that Ireland, with its rapidly expanding capacity for cutting-edge marine science, is poised to be a European leader in the deployment of underwater cabled observation systems. “There is no question that Ireland is leading in this area,” said Prof. Delaney. “As a nation, Ireland has recognised that it is a small island in a very large ocean and is wisely using this situation to its advantage.”

Dr. John Delaney was born at Pearl Harbor in Hawaii on the day after the Japanese attack in 1941. As a geologist, he once lived for six months in a set of active volcanoes on the Western Galapagos islands and, as a marine scientist, has dived to some of the most volcanically active areas of the oceans in the submarine Alvin, over sixty times. He is currently professor of oceanography and the Jerome M. Paros Endowed Chair in Sensor Networks at the University of Washington.

As the project director and principal investigator of the Regional Cabled Ocean Observatory – part of the National Science Foundation’s Ocean Observatories Initiative (OOI) – he is leading the effort to covert a large sector of the Juan de Fuca Plate and its overlying ocean into an internationally accessible, interactive, real-time natural laboratory, reaching millions of users via the World Wide Web.  He has spent the last 12 years focused on efforts to ensure that a new paradigm of distributed remote, sensor-robotic networking becomes a centerpiece in the next generation of ocean and earth science research and education.

The Institute is also the coordinating body for Ireland’s national strategy “Sea Change – A Marine Knowledge, Research and Innovation Strategy for Ireland 2007-2013” which aims to harness marine RTDI to sustainably increase the value of Ireland’s marine industries from its current level of €3 billion per annum to €4.5 billion by 2013.

The rapid growth of the Institute, coupled with its initiative in creating a planned strategy for marine research and development based on consultation with stakeholders, has earned Ireland great respect at European level – to the extent that Ireland is now seen as a model for a much larger plan to introduce a similar unifying RTDI plan for marine science to all of Europe.

Climate change is a huge concern to many people these days. Probably the greatest moderators of the world’s climate are our oceans. They transfer heat around the planet in ocean currents, they provide more oxygen into the atmosphere than any of the rain forests on earth and they absorb carbon dioxide. If we want to really understand what is happening to the world’s climate, we need to understand what is going on in the oceans..In the past, scientists have deployed stand-alone instruments on the seafloor and in the water column to gather information over periods of weeks or months.

However, the battery life and capacity of such instruments to store information is limited. But with new technology, we can use fibre-optic telecommunications cables to provide high power broadband communications and full interactivity not only to the ocean floor, but also to the water column above any scientific monitoring stations we place on the seabed.

Also, by having arrays of sensors on the ocean floor, instead of single sampling points, we can examine variations in space and time of the processes we need to understand-anything from tiny plankton to whale migrations, or from landslides, giant underwater earthquakes and even possible tsunamis. It is this combination of adaptability and interactivity that allows us to study the transient and unpredictable processes that go on in the world’s oceans.

In short, a cabled ocean observatory effectively provides unlimited power and broadband internet access instruments placed almost anywhere in the ocean and therefore an incredible window on all the processes going on in the sea.

As an island nation off the North West Coast of Europe, Ireland is ideally placed to monitor ocean conditions in the North Atlantic. Cabled ocean observatories can reach out across the continental shelf on which Ireland sits and down into the depths within a few hundred miles of the coast. The Marine Institute plans to start with a relatively shallow cabled monitoring system called SMARTBAY – the first of which will be located in Galway Bay. This system will include a number of environmental monitoring stations on the seafloor, linked to each other and to the shore, by fibre-optic cable. From there, the Institute will embark on a much more ambitious project called CELTNET, which will consist of a powered fibre-optic cable extending from Waterville in Co. Kerry, out over the continental shelf, down into the Porcupine Basin and out onto the Abyssal Plain at around 3,000 metres depth and back again. There will be seven underwater observation stations along this loop.