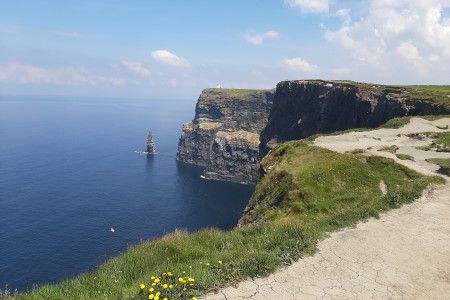 7 October 2020 - The people of Ireland are being invited to share their views on Irish coastal seascapes. Seascapes around the coast of Ireland are an important part of our sense of identity and culture. Our experience of the character of Seascapes includes coastal and marine history, folklore, art, nature and recreational and commercial activities that take place on and close to the sea.

Following a European Marine Fisheries Fund project to define the importance of our coastal seascape characteristics, a Seascape Character Assessment for Ireland has now been developed for the first time. Prepared on a regional basis, the Assessment has been drafted to define the names, boundaries and key characteristics of our coastal seascapes. The Marine Institute would now like to invite the people of Ireland to share their views and comments on the draft Assessment. The Draft Assessment is available to download at https://emff.marine.ie/blue-growth/project-13-definition-and-classification-ireland%E2%80%99s-seascapes and feedback can be submitted via the online survey: https://www.surveymonkey.com/r/QSWBVYX)

The Survey is open from Wednesday 7th October to Friday 30th October.

Caitríona Nic Aonghusa, Manager of Marine Spatial Planning at the Marine Institute said "Ireland's 7,711 kilometres of coastline includes rocky escarpments, sandy beaches and sheltered bays. Seascapes are very much about the relationship between people and place and how humans have settled and interacted in and along our coastline – from the earliest inhabitants on this island right up to today. By identifying, classifying and describing our seascape character in a holistic way, we can provide a baseline to better inform the planning and management of our seascapes."

In addition to the public survey, a series of online workshops will be held for those interested in discussing further the draft Seascape Character Assessment on Monday, 12th October from 2pm – 3pm, and Tuesday 13th and Wednesday 14th October from 8pm – 9pm. To attend an online workshop, email ruth@minogue.ie

This project has been financed by the Irish Government and the European Maritime and Fisheries Fund (EMFF) 2014-2020, Blue Growth & Marine Spatial Planning Scheme.

To celebrate and raise awareness of International Landscape Day on Tuesday 20th October, the Marine Institute is also encouraging people across the island of Ireland to share photographs of seascapes on social media. On 20th October post your photos of Ireland's seascapes on social media with #IrishSeascapes and tag the Marine Institute on Twitter (@MarineInst), or Facebook (@MarineInstituteIreland).

Ireland's National Marine Planning Framework
Led by the Department of Housing Planning and Local Government, Ireland's National Marine Planning Framework sets out long-term planning objectives and priorities for the management of our seas. The Marine Institute is providing scientific and technical services in support of the national Marine Spatial Planning processes and other projects aimed at fulfilling the Goals of Harnessing Our Ocean Wealth. This work is supported by the European Maritime Fisheries Funds (EMFF) administered through the Department of Agriculture, Food and Marine.

The Marine Institute
The Marine Institute is the state agency responsible for marine research, technology development and innovation in Ireland. It provides government, public agencies and the maritime industry with a range of scientific, advisory and economic development services that inform policy-making, regulation and the sustainable management and growth of Ireland's marine resources. www.marine.ie