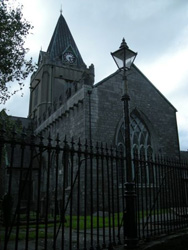 “Songs of the Deep” a unique blend of music and marine science will take place in Galway on Thursday 31st January at 7.30 pm in St. Nicholas’ Collegiate Church, sponsored by the Marine Institute. Entry is free and open to all members of the public.

While science and music rarely share the same stage, Galway will be the venue for a unique experiment in collaboration when three marine scientists explore the synergies between science and art in a celebration of Galway’s position as a “gateway to the deep Atlantic”.

The night will feature presentations by Professor John Delaney of the University of Washington combining poetry, scientific information and stunning underwater photography. Music will include traditional choral recitals by Cois Cladaigh, conductor Brendan O'Connor who is also a marine scientist.

This unique event, complemented by the wonderful atmosphere and acoustics that St. Nicholas' provides, will be well worth attending and those interested are advised to come early to be sure of a seat.

Notes to Editor
John R. Delaney, Ph.D.
Dr. John Delaney is professor of oceanography and the Jerome M. Paros Endowed Chair in Sensor Networks at the University of Washington. As the project director and principal investigator of the Regional Cabled Ocean Observatory – part of the National Science Foundation’s Ocean Observatories Initiative (OOI) – he is leading the effort to covert a large sector of the Juan de Fuca Plate and its overlying ocean into an internationally accessible, interactive, real-time natural laboratory, reaching millions of users via the World Wide Web. He has spent the last 12 years focused on efforts to ensure that a new paradigm of distributed remote, sensor-robotic networking becomes a centrepiece in the next generation of ocean and earth science research and education.

The importance of underwater observatories, as early warning systems for environmental and geological incidents as well as unique providers of information on the ocean, has been emphasised by the European Commission in its recent Maritime Policy papers and in Ireland’s own response to the EU Consultation process on this policy.