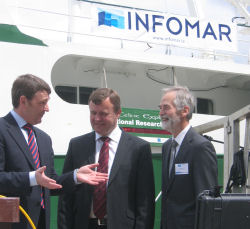 Dr Peter Heffernan (CEO Marine Institute), Minister of State at the DCENR Mr Sean Power TD, and Dr Peadar McArdle of the GSI at the launch of www.infomar.ie at Dublin Docks.

Minister of State at the Department of Communications, Energy and Natural Resources, Seán Power, T.D. today launched www.infomar.ie a new website which will provide information on the nature of the seabed, physical habitats and water depths which has been gathered through  INFOMAR (Integrated Mapping for the Sustainable Development of Ireland’s Marine Resource), Ireland’s national marine mapping programme.

Speaking on board the RV Celtic Explorer, one of the vessels involved in the programme, Minister Power said, ‘With over 220million acres of our national territory lying beneath the sea, many of the potential benefits from this resource are as yet unrealised.  The INFOMAR project is now discovering those resources and making information on them available online.  This website will have benefits for a wide spectrum of activities from navigation, safety at sea, fisheries management and seabed resource management.  As Minister with responsibility for both the Information Society and Natural Resources, I am delighted to see the INFOMAR project placing information delivery at the heart of its operations.’

Minister Power concluded by paying tribute to all of those involved in the project which is jointly managed by the Geological Survey of Ireland and the Marine Institute.  ‘INFOMAR along with its predecessor, the Irish National Seabed Survey, constitutes the largest civilian marine mapping programme worldwide and they have truly made Ireland a leader in this field of endeavour.  There is a significant level of coordination required by both organisations, scientists, and the crews of the ships, boats and planes to bring this project to fruition and I heartily congratulate all involved.’

The INFOMAR programme has just concluded operations in Donegal and Sligo Bays on board the Marine Institute vessel RV Celtic Voyager. In addition to ship-based surveys, aerial LiDAR sweeps have been completed in recent weeks in parts of Galway and Tralee Bays together with portions of Lough Foyle.

Speaking at the launch of the INFOMAR website John Evans, joint programme manager of the INFOMAR programme from the Marine Institute, said “Together with our colleagues in the Geological Survey we are delighted with the progress we have made to date in mapping our in-shore area. These bays are extremely challenging to survey and we encourage all to view the data via the www.infomar.ie website”.

INFOMAR is an ambitious joint venture between the Geological Survey of Ireland and the Marine Institute to map Ireland’s most productive and commercially valuable inshore waters. Covering some 125,000 square kilometres of underwater territory, INFOMAR will produce integrated mapping products covering the physical, chemical and biological features of the seabed.

INFOMAR is a successor programme to the Irish National Seabed Survey, the combined efforts of which constitute the largest civilian seabed mapping exercise in the world. To date the INFOMAR programme has conducted detailed surveys in Bantry, Dunmanus, Galway, Sligo and Donegal Bays as well as priority area off the south-west coast of Ireland. INFOMAR is exploring and mapping the seafloor using high resolution multibeam sonar, measuring gravity and magnetic variation, and recovering grab samples for biological, chemical and geological analysis. In addition, shallower areas (<10m) are mapped using an airborne LIDAR system.