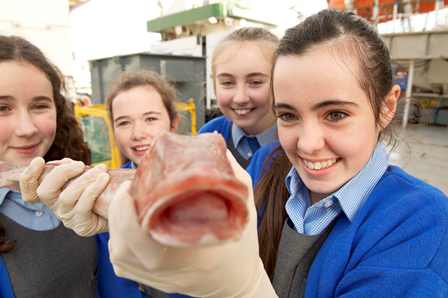 Over seven hundred class students from Galway, Roscommon and Mayo are visiting the RV Celtic Explorerin Galway over the next two days (Thursday 5th & Friday 6th December 2013). Having entered the “Exploring the XTRA-Ordinary Writing Competition” earlier this month, students demonstrated their awareness of Ireland’s research vessel RV Celtic Explorer and their understanding of Ireland’s marine life and ocean.

The joint winners of the competition were Ciara MacDonald, Scoil Mhuire Oranmore and Lauren McGinely, Scoil Colmcille, Co Donegal.  Ciara wrote a poem called "A fish is what I’m destined to be " and demonstrated a unique approach to her awareness of Ireland’s marine life. She explained what it would be like to be a fish, starfish and dolphin and in fact maybe her destiny in the future is to be on the Celtic Explorer. Lauren wrote a poem called “The Celtic Explorer” and showed a great understanding of the work marine scientists undertake on board the research vessel.

Dr Peter Heffernan, CEO of the Marine Institute said, “The competition captured the imaginations of many students, revealing their understanding of the important influence the ocean has on our lives. Learning about our ocean at a young age fosters engagement with the sea which is a key goal of ‘Harnessing Our Ocean Wealth - An Integrated Marine Plan for Ireland’. The sense of wonder and curiosity about the sea was clear from the many wonderful entries we received and I hope the students enjoy their time onboard the Celtic Explorer in Galway”.

Welcoming the students and teachers to the RV Celtic Explorer, Aodhan Fitzgerald, from RV Operations at the Marine Institute, congratulated the students on their knowledge about the marine, “We’re delighted to be able to show the work of our marine scientists first hand. As the research vessel is at sea for over 300 days of the year it is a welcomed opportunity to be able to facilitate the open days for so many of the students who entered the competition”.

While on board the research vessel, demonstrations of how Ireland’s 220 million acre seabed territory and inshore waters are mapped were shown. Students also learned techniques for identifying and ageing fish in the wet-lab as well as seeing the Bridge area where Captain Dennis Rowan and Officer of the Watch John O'Regan explained how the ship is run.

Students got to see the Remotely Operated Vehicle (ROV) Holland 1, which recently captured underwater footage and samples of a novel deep sea habitat in the Whittard Canyon. The inshore research vessel, RV Celtic Voyager will also be alongside at Galway docks and will be visited by some of the Children.