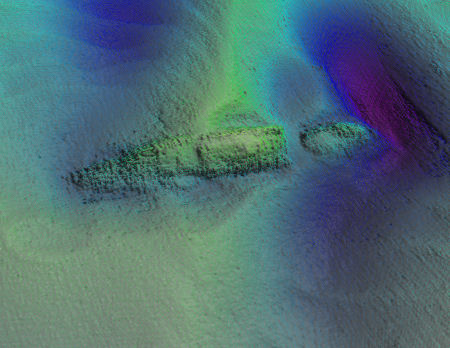 HIGH RESOLUTION images of a merchant ship which was sunk ninety-four years ago today (October 12th) off the coast of Dublin have been revealed by the INFOMAR (Integrated Mapping for the Sustainable Development of Ireland's Marine Resource) Programme. The images were obtained during a mission on the national research vessel the RV Celtic Voyager earlier this year which surveyed the wreck of the first Guinness merchant vessel, the W.M. Barkley.

The detailed seabed images, which include deck features and complex sand wave structures, were recorded by towed sidescan sonar provided by the Moore Marine Group, and give a visual insight into the defensively armed ship that was sunk by a German torpedo in 1917, seven miles east of the Kish Bank off Dublin. 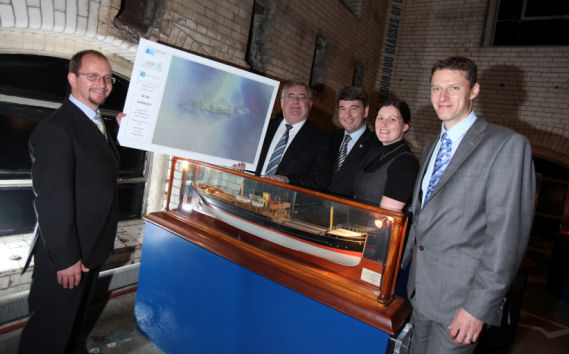 In May 2010, during a large scale mapping survey in the Irish Sea by INFOMAR, a national marine study run by the Marine Institute and the Geological Survey of Ireland, identified a seabed feature which, to the trained eye, was discernable as a potential shipwreck lying in the same position recorded on the Admiralty Chart, the EU wreck site and UK Hydrographic Office wreck site directories, as well as a survey conducted in the 1980s as the last known position of the W.M.Barkley.

Viewing the spectacular imagery of the shipwreck Minister for Communications, Energy & Natural Resources, Pat Rabbitte, said "I am delighted to note the continued excellence of the valuable work being carried out under the INFOMAR project. These images from the deep reveal a unique view of part of Ireland's marine heritage and I am delighted to announce details of INFOMAR''s annual seminar to be held in Galway on November 16 and 17th."

Ninety four years ago on the dark night of October 12th 1917 the W.M.Barkley was torpedoed without warning by the German submarine UC-75. Within minutes the ship, which was owned and operated by the Guinness Company of Dublin, broke in two and sank, taking with her to the bottom four men including her Captain and leaving the rest of her crew to face the sea in an open lifeboat. Now, the darkness where the ship has lain in pieces has been disturbed, probed by fingers of sound that are mapping the seabed in incredible details and bringing to light the position of this famous Irish shipwreck.

"As the first Guinness owned ship, the W.M. Barkley played an important role in the story of the transportation of GUINNESS beer overseas," said Eibhlin Roche, Guinness Archivist. The events of the night of 12th October 1917 are very much part of the history of Guinness that is recorded in the Guinness Archive. It is exciting to finally know the exact resting place of the W.M. Barkley." 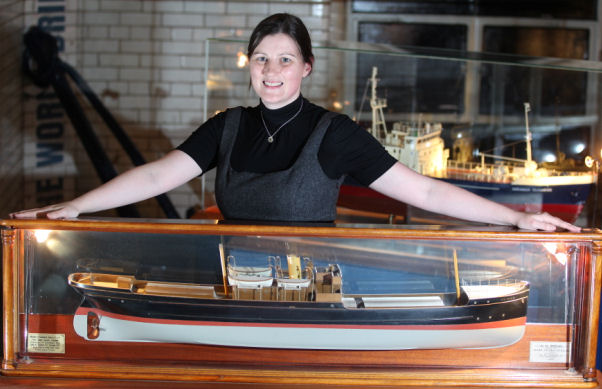 Eibhlin Roche with the scale model of the W.M.Barkley at the Guinness Storehouse. Photo: Jason Clarke Photography

A scale model of the W.M. Barkley is on display in the Transport Gallery of Guinness Storehouse remembering the lives of the Guinness men who both perished and survived the events of 12th October 1917. These are stories of tragedy and bravery portraying Irish traditional values, and how they were brought to light with the application of cutting-edge technology.

These INFOMAR photos show topographic seafloor images in 3D, showing the partially buried wreck of the W M Barkley lying at a water depth of 56 metres, with deeper scouring around it down to 72 metres (darker colours indicate greater depths).

The images were created from sonar data acquired onboard the Marine Institute's research vessel RV Celtic Voyager, during INFOMAR Programme mapping in 2010 and 2011 with data processed by INFOMAR's Fabio Sachetti (University of Ulster) and Charise McKe

on (Geological Survey of Ireland).

Notes to Editor
History
On the 12th October 1917, Guinness's merchant vessel W. M. Barkley set sail from Dublin bound for Liverpool with a cargo of "hogshead" barrels of the company's world-famous stout. The ship had been originally built for the John Kelly coal company in 1898 by the Scottish shipbuilding company Ailsa Shipping of Troon, but had been sold to Guinness in 1913. She had a displacement of some 569 Gross Registered tons unladen and was the first Irish merchant ship to be 'defensively armed' with guns against attack by the German Navy.

Unfortunately for the W.M. Barkley, however, the deadly attack that sank her came from below the waves in the form of a torpedo from the German submarine UC-75. The small minelaying submarine was equipped with 18 mines, seven torpedoes and a deck gun and had been built at the Vulcan ship yard in Hamburg. Like the W.M. Barkley it displaced 545 tons in total.
The impact from the torpedo broke the ship's back, breaking her sides and leaving her to sink within minutes. Survivors took to the lifeboats and rowed away from the sinking hull to avoid getting dragged down by the suction of the sinking ship.

As survivor Thomas McGlue described, "Then we saw the U-boat lying astern. I thought she was a collier, she looked so big. There were seven Germans in the conning tower, all looking down at us through binoculars. We hailed the captain and asked him to pick us up. He called us alongside and then he asked us the name of our boat, the cargo she was carrying, who the owners were and where she was registered. He spoke better English that we did. . . . He said we could go . . . Then he pointed out the shore lights and told us to steer for them."
With the survivors left alone in the darkness, surrounded by barrels of stout, they put out a sea anchor after a failed attempt to row for the Kish lightship. They were finally rescued by the crew of the passing collier Donnet Head, on course for Dublin, who took them on board and tied their lifeboat alongside. They arrived back in port at 5.00 a.m. where they were warmed by a fire and given dry clothes and brandy by the Guinness superintendent.

For almost a century, the W.M. Barkley remained alone in the darkness of the sea. Local fishermen may have noted the wreck on their charts as a trawl snag to avoid, but full details of the wreck and how it lay on the seabed only came to light recently, firstly through an intrepid expedition by local amateur divers. The development of special 'Tri-Mix' mixed-gas diving equipment for the sports market means even wrecks as deep as the W.M. Barkley, which lies below 57 metres of water, have become accessible.

A sports diver who visited the wreck in 2003 described how the starboard side of the ship was gone but that the stern seemed in good condition. A large sand wave had also built up around the wreck, running from east to west. These discoveries were followed up in the form of research by INFORMAR, Ireland's most extensive and accurate inshore seabed mapping exercise.

The INFOMAR programme is a joint venture between the Geological Survey of Ireland (GSI) and the Marine Institute and is the successor to the Irish National Seabed Survey (INSS). Covering some 125,000 square kilometres of underwater territory, the INFOMAR project will produce integrated mapping products covering the physical, chemical and biological features of the seabed.
The surveys are carried using a range of platforms, including the Marine Institute's RV Celtic Explorer and RV Celtic Voyager, inshore launches and Airborne LIDAR. The programme uses ship-mounted acoustic multibeam sonar and geophysical technology to provide vital information on water depth for safe shipping, as well as analyse the properties of the seabed for information that can guide fishing, ocean renewable development, environmental protection, and marine archaeology.

As the INFOMAR imagery data collected during the large scale mapping survey in May 2010 was analysed and reprocessed the shape of a broken vessel on the seabed became clear, in the same position as the last known recording of the W.M.Barkley. It lay from East North East to West South West on the sandy bottom, which had been scoured around the wreck by the strong prevailing currents into large hollows and ridges. Following on from this, two members of the INFOMAR team paid a visit to the Guinness Storehouse exhibition where a model of the W.M.Barkley is on display and noted the similarity of her shape to the detailed seabed images.

An opportunity arose a year later to visit the wreck site again as the R.V. Celtic Voyager was passing by on another mission. A towed sidescan sonar was provided by the Moore Marine Group and deployed by their archaeological expert to add a new layer of discovery to this historic wreck and war grave. This device, towed behind the vessel close to the seabed, provided higher resolution imagery showing deck features and complex sand wave structures around the ship until bad weather put a halt to proceedings.

The next step for INFOMAR, and Guinness, is to co-ordinate an opportunity where enough data can be acquired to build up the full picture of the state of the W.M.Barkley. The vision is to deploy a miniature robot submarine with an onboard camera to bring back high-resolution pictures of the famous stout company's long-lost sunken ship.

The INFOMAR Annual Seminar will take place at the Marine Institute in Galway on November 16 & 17, see INFOMAR.ie for details.

The Celtic Voyager is a 31.4m multi-purpose research vessel. The vessel is based in Galway, which is ideally located as the gateway to the Atlantic and geographically close to the main working areas. The vessel has wet, dry and chemical laboratories, which are permanently fitted with standard scientific equipment and can accommodate 6 - 8 scientists with a maximum endurance of 14 days. The vessel is manned by a very experienced crew who are highly skilled with the handling and deployment of scientific equipment.

The Celtic Voyager facilitates the collection of fisheries, geophysical, oceanographic and environmental data and provides practical training for the next generation of marine scientists. This research is of crucial national importance, to ensure the development of Ireland's vast natural resource in a sustainable manner.

Side-scan sonar is a category of sonar system that is used to efficiently create an image of large areas of the sea floor. It is often used to conduct surveys for maritime archaeology, and in conjunction with seafloor samples it is able to provide an understanding of the differences in material and texture type of the seabed.
Side scan uses a sonar device that emits conical or fan-shaped pulses down toward the seafloor across a wide angle perpendicular to the path of the sensor through the water. This may be towed from a surface vessel or submarine, or mounted on the ship's hull.

The intensity of the acoustic reflections from the seafloor of this fan-shaped beam is recorded in a series of cross-track slices. When combined together along the direction of motion, these pieces form an image of the sea floor within the swath (coverage width) of the beam. The sound frequencies used in side-scan sonar usually range from 100 to 500 kHz; higher frequencies yield better resolution but less range.

Moore Marine is a fully integrated marine archaeological, geophysical and oceanographic service provider. They specialise in the provision of services, technical expertise and advice to Private Industry, Institutions and State bodes regarding the impact on and protection of our maritime heritage and environment.

Their technical expertise leads them to undertake a wide variety of projects suited to Environmental Impact Assessments and Pre and Post Developmental Appraisal of Marine Projects such as:
Pier and Harbour developments

Moore Marine is a Health and Safety Authority (HAS) and Health and Safety Executive (HSE) registered environmental and archaeological diving contractor. As such we ensure that all dives are undertaken in accordance with diving operations at work regulations and approved Codes of Practice.