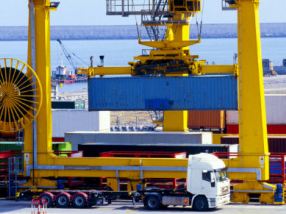 The Irish Maritime Development Office (IMDO) has today released a report on its analysis of the semi-state port companies' published financial statements for the accounting period 2011. The focus of this analysis is to extrapolate key data from the annual company financial reports in order to provide a comparative review of the ports. The nine semi state port companies reviewed are all under the auspices of the Minister for Transport, Tourism and Sport.

The key findings of the report highlight that after a combined growth of 3% in turnover in 2010, the nine commercial ports recorded a fall in turnover of 3% in 2011 with turnover falling to €120m. The cost of sales remained relatively unchanged at €46.9 million. Despite the downturn last year, five of the ports managed to return profits which contributed to a total operating profit for the industry of €33 million, almost identical to 2010, with four ports recording operating losses totalling €353,640. Dublin Port generated 57% of the total share of turnover, up 3% from 2011, while it was responsible for contributing 83% of the total operating profits from the nine ports last year. Dublin and Cork, contributed a dividend to the State in the financial accounts for 2011 of 16.5million and €634,315 respectively. Galway has also announced their intention to pay a dividend in their 2012 accounts.

The latest analysis carried out by the IMDO also suggests that the majority of ports continued to reduce their costs during 2011. Labour costs fell by 8% last year, largely as a result of further reductions in the number of port employees from 429 to 389, which included a reduction of 11 employees as a result of the rationalisation of Dundalk Port Company. The total port labour force has now reduced by 26% since 2007. Eight of the nine companies recorded lower total labour operating costs in 2011.

The average return on capital employed (ROCE) increased to 2.44% last year. However only three of the nine ports provided a ROCE higher than the average, with Dublin Port highest at just over 10%.
The IMDO believes that trading conditions at Irish ports will remain challenging for the financial year 2012 with no anticipated prospects for overall growth in the principal cargo segments. The openness of the Irish economy will mean that any near to medium term recovery in traffic growth through Irish ports is likely to be dependent on a wider recovery occurring in the European and Global economy. Our forecast is that overall turnover and profits for the Irish ports will fall this year. However we still expect that the larger commercial ports will remain profitable while smaller regional ports are less likely to achieve breakeven levels this year.

A copy of the report is available to download from the IMDO website(pdf, 3.96 MB). The report can also be accessed through the Marine Institute's Open Access Repository (PDF, 4.06 MB)

The review, assumptions and opinions expressed within this report are exclusively those of the IMDO.