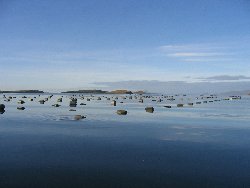 The value of fish and shellfish from Irish fish farms rose in 2006 by 13% over 2005 figures, from €110.2 million to €124.6 million, according to the “Status of Irish Aquaculture 2006” launched today (Wednesday 3rd October) by Marine Minister Mr John Browne T.D. in Dublin at a regular meeting of the Aquaculture Forum of the Department of Agriculture, Fisheries and Food.

This figure is just short of the all-time peak value for Irish aquaculture production of €125 million, which was achieved in 2002.   This is in spite of the fact that in 2006 production tonnage actually dipped by 8% to 57,422 tonnes and was due to a dramatic increase in the price of farmed shellfish (29%) and a stable price for farmed finfish, such as salmon and trout. Exciting developments in 2006 include the farming of cod, perch, sea urchins, abalone and even seahorses on Irish fish and shellfish farms.

The report is a joint collaboration between the three main state agencies involved in the development, monitoring and scientific support of the fish and shellfish farming industry in Ireland – An Bord Iascaigh Mhara (BIM), the Marine Institute and Taigdhe Mara Teo (the marine development subsidiary of Údarás na Gaeltachta). It gives a detailed analysis of the Irish aquaculture industry in 2006 with sections on wide variety of subjects, from production and employment to research and development to quality and monitoring.

Special sections on the implications of Sea Change – A Maritime Knowledge, Research and Innovation Strategy for Ireland 2007 – 2013 and the Cawley Report on the fishing industry - Steering a New Course are also included.

Overview of the Report

Modern Irish aquaculture began its development in the early 1970s and has become an important contributor to rural economies and the national exchequer, generating incomes in many areas where there is little other primary wealth creation opportunity.

Employment in the Irish fish and shellfish aquaculture industry rose by 12% in 2006 over 2005 figures to 2,058 full and part-time jobs.

While the national finfish harvest volume decreased from 15,384 tonnes in 2005 to 12,726 in 2006 ( a drop of 17%) the total harvest value of €61.4 million dipped by only 0.2% due to an increase in the average price per tonne for salmon. The production drop was due to disease problems (primarily Pancrease Disease (PD)) and Infectious Pancreatic Necrosis (IPN) which continued to adversely affect salmon production.

Production of freshwater rainbow trout increased from 897 tonnes in 2005 to 970 tonnes in 2006 with a total value of €2.5 million, which was up 8.6% on the previous year. Production of novel finfish species, such as perch, Arctic charr and ornamental fish on Irish farms netted over €200,000 in 2006, while the cultivation of cod in sea cages represents a major step forward for Irish aquaculture towards supplementing harvests from the sea fishing industry.

This forum was set up in 1999 to improve dialogue and co-ordination between government bodies and industry and meets on a regular basis. Meetings are chaired by the Department of Agriculture, Fisheries and Food and attended by representatives of the Irish aquaculture industry, BIM, the Marine Institute and Údarás na Gaeltachta (whose marine development subsidiary, Taighde Mara Teo, fulfils a developmental role for aquaculture agencies in Gaeltacht areas).

It is also charged with implementing the findings of the Cawley report on the fishing industry - Steering a New Course.   Support for the aquaculture industry is provided through three of its specialist divisions in Aquaculture Development, Market Development and Marine Services to support the industry with technical and financial assistance, marketing and quality control, training and engineering services.

It has grown into an internationally respected science body with some 220 staff, two purpose-built vessels, a research facility near Newport, Co. Mayo and a new headquarters and laboratory at Oranmore on the shores of Galway Bay.

Taighde Mara Teo - a subsidiary of Údarás na Gaeltachta, brings an integrated approach to the development of aquaculture through a wide range of development projects in the seafood sector in the Gaeltacht areas of Donegal, Mayo, Connemara, west Kerry, Cape Clear island and Dungarvan, Co. Cork.

Support for these projects includes technical assistance, such as technology transfer, provision of technical staff while developing human resources within an enterprise as well as administration, IT, and business skill support.

Financial assistance can be provided through investment by means of preference or redeemable shares, as well as grant aid for capital, training, research and development.