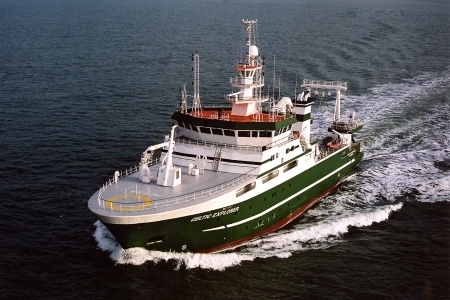 A shark species, previously unrecorded in Irish waters, has been sighted 100 miles south-west of Ireland on the continental shelf edge, during a recent fisheries survey on the Marine Institute's RV Celtic Explorer.

A smooth hammerhead shark was reported on the edge of the continental shelf, south-west of Ireland. The sighting was made by experienced marine mammal observer John Power and bird observer Paul Connaughton during the Marine Institute's Western European Shelf Pelagic Acoustic Survey (WESPAS).

John Power said, "While scanning the ocean surface, we sighted a dorsal fin unlike anything we had encountered before. It was quite different to the fins seen on basking sharks and blue sharks. After consulting available ID keys, we agreed that the shark must be a smooth hammerhead."

The large, tall and slender dorsal fin of the smooth hammerhead shark distinguishes it from other shark species. The smooth hammerhead also has a single-notch in the centre of its rounded head and are up to four metres in length. The species gives birth to live young and the pups are usually found in the shallow sandy waters near Florida, the Caribbean and West Africa. However, the species has been recorded as far north as England and Wales. 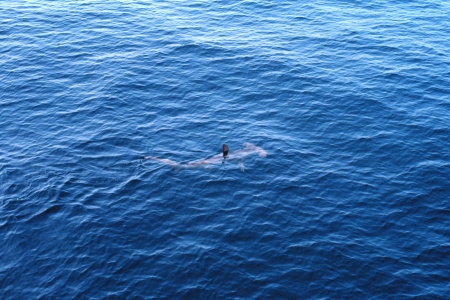 The smooth hammerhead was sighted during the WESPAS survey, which surveys the waters from France to Scotland and west of Ireland, each year. Marine Institute scientists collect acoustic and biological data on herring, boarfish and horse mackerel, which is used to provide an independent measure of these fish stocks in Irish waters. Scientists also monitor plankton, sea birds and marine mammals during this survey.

Dr Paul Connolly, Director of Fisheries and Ecosystems Services at the Marine Institute said, "Our Irish waters support a range of marine life and diverse ecosystems, including 35 known species of sharks. This is an exciting encounter, especially since a rare deep-water shark nursery, 200 miles west of Ireland, was discovered by Irish scientists last year using the Marine Institute's Remotely Operated Vehicle (ROV Holland 1)."

"This sighting of a new shark species, shows the importance of our fishery surveys to monitor our marine environment, and to observe changes in our oceans and marine ecosystems. Observing and understanding a changing ocean, is essential for protecting and managing our marine ecosystems for the future," Dr Connolly said.

The hammerhead shark poses little risk to humans, and there have been no known fatalities from hammerhead sharks anywhere in the world to date. The species is listed as Vulnerable on the International Union for Conservation of Nature (IUCN) Red List of Threatened Species, and is being increasingly targeted for the shark fin trade as its large fins are highly valued.

Thirty-five species of sharks have been recorded in Irish waters, including the blue shark, porbeagle shark, lesser spotted dogfish and the second-largest shark in the world, the basking shark.