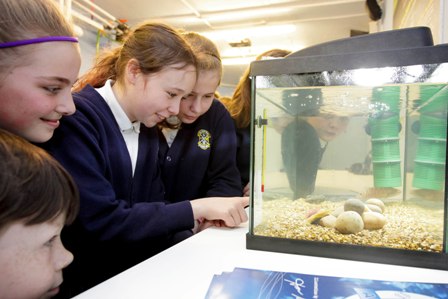 Over the last couple of months, up to 200 primary school students on the East Coast of Ireland took part in a six week programme which included the installation of aquariums in nine schools as part of the Explorers Education Programme.  “Using the aquariums to bring sea life into classrooms is an innovative way for students to learn about Ireland’s marine species and resources”, said Tomás Ó Briain, coordinator of the Explorers Project at Blackrock Education Centre.

“Workshop held for teachers and weekly visits to the schools to find out about the students’ experiences and caring for the aquariums was a fantastic way to engage with the students on marine topics.  The wide variety of projects produced at the end of the programme reflects the enthusiasm of the students for marine science and the development of important skills in science, literacy, maths and geography”, he added.   The installation of the Explorer aquarium tanks with a variety of sea life typically found in rockpools around the Irish coastline was carried out by the National Sea-Life Centre, Bray.

Pat Ó Súilleabháin, Director of the National Sea-Life Centre, Bray commented on the positive experience of caring for the aquariums on students, stating “It was wonderful to see the excitement and enthusiasm of the students when the aquarium tanks were installed in the classrooms.  Through weekly newsletters and projects students became part of the marine world. The newfound eagerness of the students for marine science was visible when the groups visited Sea-Life, showing the invaluable contribution of the programme to marine education and science’’.

Congratulating the schools participation in the Explorers Education Programme, Cushla Dromgool-Regan of the Marine Institute highlighted the value of learning about the ocean and the effects it has on our daily lives.  “The programme was originally developed by the Marine Institute eight years ago and is currently used by over 50 schools reaching over 5000 thousand students throughout Ireland''.

Director of Blackrock Education Centre, Pat Seaver, thanked the Marine Institute for their involvement, adding that “Raising awareness of marine education amongst students through science, mathematics, arts and geography along with other cross curricula activities brings long term benefits.  The use of aquarium tanks in the classrooms enables students to develop vital observation and investigation skills at a young age, which can be applied to all elements of their education. The support provided by the Marine Institute for the Explorers Education Programme ensures that young students become interested in Ireland’s marine resources and its future development early in their education”.

A wide variety of marine based lesson plans, activities and science experiments, including details on the Real Map of Ireland, can be downloaded from www.explorers.ie.  The Explorers Education programme was developed by the Marine Institute in collaboration with a number of key partners including Galway Atlantaquaria, Sealife Bray Aquarium,Blackrock Education Centre, Galway Education Centre and the Lifetime Lab, Cork.

The participating schools in the East Coast Explorers Education Programme 2013 were: