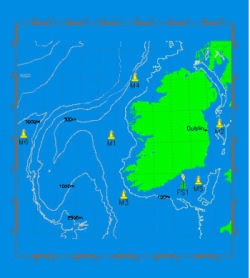 Starting today (Thursday 5th November) from Galway, the Marine Institute research vesselRV Celtic Voyager, begins the task of replacing each of the six original weather buoys, placed around the coast with new and improved systems that will not only provide a wider range of information, but an improved ability to withstand the winds and waves they faithfully record off the Irish coast.

Weather is THE fundamental force at sea. It can turn a sunny day into a swirling death trap in a matter of minutes, send a yacht peacefully on its way or sink it, and mean the difference between a full fishing net and a desperate race for home.  It can also play an important part in history, as it did back in 1944, when General Eisenhower decided to commit his forces on June 6th to the D-Day landings based on a weather report from Blacksod Bay in Co. Mayo. No wonder then that after the tragic loss of the trawlers Carrickatine and Scarlet Buccaneer in 1995, one of the key recommendations of the Fishing Vessel Safety Review Group, set up under the then Department of Marine the following year, was for improved capability in weather forecasting and storm warning off the Irish coast.

This recommendation led to a joint venture, between the Department (today funding is provided by the Department of Transport), the Marine Institute, Met Éireann and the UK Met Office to position a network of automatic weather buoys around the coast of Ireland. This project began with the laying of the first offshore weather buoy off the Aran Islands in 2000, which has been followed by one buoy in each of the following six years—off the southwest coast of Cork, off Donegal Bay, Dublin Bay, off the southeast coast and finally some 200 miles out into the Atlantic at position M6.

“Like the original versions they replace,” says Dr Guy Westbrook of the Marine Institute’s Ocean Science Services Team, “each new buoy has a bright yellow body for high visibility, supporting a stainless steel superstructure carrying its satellite communication equipment and meteorological sensors. These sensors include an anemometer, which records hourly the speed of the wind in knots, - and a wind vane which records the average wind direction. They are also fitted with an electronic sensor to measure relative humidity, which is an important factor in measuring the saturation of the air with water vapour and in the prediction of rain and fog.”

As well as measuring conditions in the atmosphere, each buoy also monitors the temperature of the sea below it and the amount of salt it contains (the salinity), with a temperature and conductivity meter. These measurements are vital to the monitoring of ocean currents, to understanding global warming and potential climate change. “Anyone who has seen the film “The Day After Tomorrow” will have seen that the fictional weather disasters which overcame the USA and England were first predicted by a sudden dramatic drop in seawater temperature, as the North Atlantic gyre collapsed due to melting ice from the Arctic,” says Dr Westbrook. “Hopefully, this will never happen in reality”.

The film also depicted a gigantic tidal wave flooding New York. While this was another fictional event depicted by Hollywood, each of the six data buoys around the Irish coast is fitted with a “heave sensor” inside the hull of the buoy to measure significant wave height together with their “frequency”;which gives a measure of the speed of the waves as they move past the buoy. These readings allow meteorologists and oceanographers to predict any “storm surges” – dramatic increases in wave height that can pose a danger to mariners and offshore industries – albeit on a smaller scale than the fictional wave that flooded New York in the film. An example would be the flood that hit the Ringsend area of Dublin in February 2002.

The buoys also measured the highest recorded wave (17.2m) off the west coast during a storm surge in December 2007, which had been predicted by sophisticated computer-generated models allowing warnings to be given in advance, particularly to shore anglers and beach combers along the west coast.

All this information is transmitted to shore via satellite communication. This communication process starts with information from the sensors being collected from each buoy’s onboard Data Acquisition System, then transmitted via the Meteosat satellite to Meteosat Operations Control in Germany. The information is then loaded onto the Global Telecommunications System (GTS) so that meteorologists in different countries can access it for their forecasts.Once the data is on the GTS the UK Met Office download it and pass it to Met Eireann, who in turn upload it onto the Marine Institute website, where accurate positions of the buoys, as well as a host of other information, can be downloaded online from www.marine.ie/databouy ; this information is updated every hour.

The information provided by the buoys is invaluable to the Met Éireann weather forecasters who work out of  the Central Analysis and Forecast Office (CAFO) in Glasnevin, Dublin. The hourly reports of pressure, wind speed, wave heights and temperature are used in real-time, 24 hours per day, for analysis of the current weather situation and for verification of the current forecasts and warnings. The buoy observations are plotted, along with weather observations made on land, and with observations from ships, on the hourly synoptic chart of Ireland, to produce the familiar frontal and isobaric charts (where high and low pressure regions are denoted through lines of equal atmospheric pressure) that appear in our television and newspaper forecasts.

Gerald Fleming, newly installed as Head of Forecasting with Met Éireann, noted that ‘there are a variety of weather observations available to our forecasters, some in the form of “remote” observations (such as those from weather satellites and radars) and some in the form of “ground truth” (of which the reports from the weather buoys are an example). Every source of weather information acts to reinforce and complement other sources; with weather observations the whole is definitely greater than the sum of the parts. The observations from the weather buoys put “flesh” on the skeletons of weather systems sketched out by weather satellite imagery. The buoys also have a very valuable role in helping to verify the predictions of wave height produced by Met Éireann’s own wave models.’

Atmospheric pressure reports from the marine buoys are also extremely important when storms form rapidly off the coast (as they did during the storm of August 1979, which devastated the Fastnet Yacht Race). Such rapid deepening of low pressure systems are very difficult for even the most advanced computer models to predict as not only do they occur over a relatively small area, and in a very short time span, but their direction of movement, once formed can be very erratic.

Real time pressure and wind reports from marine buoys can provide crucial information to a forecaster about the location, movement and “explosive” deepening of these depressions.   It is very difficult to provide an accurate representation of conditions at sea through inference from land-based observations; the dynamics of air movement over land and sea are quite different. Without information from the offshore buoys, wind speeds at sea could well be underestimated and gales or storms at sea could be missed or underestimated by the forecasters on shore.

Finally, the buoys’ readings of both air and sea temperature offshore are important indicators of fog.   All this information is brought together in the well-known “Sea Area Forecast” that covers coastal waters up to 30 nautical miles offshore, and is issued from Glasnevin four times a day. Observations from the buoys are included at the end of each forecast as published on the web. They are also available on the Weatherdial products from Met Éireann, and are read out during the VHF forecasts as broadcast by the Coast Guard.

In addition, measurements from the weather buoys are available in real time on the website www.marine.ie . This web page incorporates graphic representation of data, so that trends can be easily seen, as well as technical information on the buoys, their accurate positions and the latest detailed readings from each of the sensors. The web page displays also the real-time position of each of the Marine Institute’s two research vessels, Celtic Explorer and Celtic Voyager.