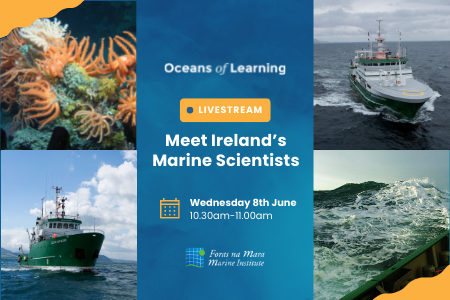 3rd June 2022: On Wednesday 8th June, the Marine Institute will broadcast a live chat with Ireland's marine scientists to celebrate #WorldOceansDay. The conversation will be broadcast live on the Marine Institutes Facebook page, LinkedIn profile, Twitter account and YouTube Channel at 10.30am.

The RV Celtic Explorer and the RV Celtic Voyager, are among the most intensively used research vessels in the world. They have played an essential role in fisheries surveys, seabed mapping, and oceanographic research. Expeditions on the RV Celtic Explorer in Irish and international waters have resulted in many exciting discoveries - from deep-water shark nurseries, cold-water coral reefs, to hydrothermal vents fields in the mid-Atlantic.

The panel of scientists will share what they enjoy about their work at sea and some of their most memorable experiences while on board. The Marine Institute scientists will also talk about their career paths and offer advice for those interested in pursuing marine and maritime careers.

This Live Broadcast is part of the Marine Institute's Oceans of Learning series, which aims to remind everyone of the major role the ocean has on our everyday lives and to inspire a new generation of ocean champions. The Oceans of Learning series on marine.ie offers online interactive activities, videos and downloadable resources all about our ocean.

The scientists joining the Live Broadcast include:

Claire Moore, Fisheries Scientist
Claire is a fisheries ecologist, and says she feels more like a detective then a biologist. She works on solving biological puzzles around the health and productivity of our oceans, piecing together valuable information collected at sea, in ports and labs, to produce statistical models that inform our decisions for a sustainable future.

David Stokes, Fisheries Scientist
David is an enthusiastic fisheries scientist with over 25 years' experience in data collection and analysis, both in marine and freshwater. David has worked with the Marine Institute for the last 22 years to run the Irish Groundfish Survey program on the RV Celtic Explorer, which originally started on the Celtic Voyager combined with chartered commercial fishing vessels.

Caroline Cusack, Biological Oceanographer
Caroline leads the Marine Institute's annual ocean climate survey on the RV Celtic Explorer. She is also involved in ocean observation projects that monitor the health of our ocean. Recently she has carried out research related to developing marine ecosystem climate services.