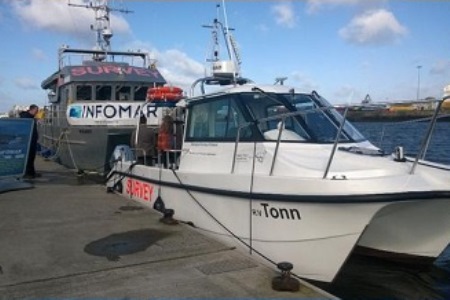 As part of Ireland's national marine mapping initiative, the INFOMAR programme carries out hydrographic & geophysical surveys of Irish territorial waters. It is a cooperative programme between the Geological Survey of Ireland and the Marine Institute and is funded by the Department of Communications, Energy and Natural Resources.

Minister McHugh said "The INFOMAR programme is unique among the various projects funded by my Department, DCENR, in that, for 6 - 8 months of the year, the Infomar team of marine survey specialists live and work among the Irish coastal communities around the entire coast of Ireland." The Minister went on to say one of the achievements of the INFOMAR programme is the focus on disseminating new information on the Irish offshore, which is available free on the http://www.infomar.ie/data/ website. The Minster added,"... and a really good example of the applied use of INFOMAR data is the smartphone App produced jointly by the Irish Underwater Council and INFOMAR, which affords a user access to The Wild Atlantic Way/Dive & Snorkelling sample locations" (https://play.google.com/store/apps/details?id=com.infomar.infomardiving).

The RV Tonn, is named appropriately after the Irish for wave, as it both operates on the waves and uses sound waves to investigate the depth and nature of the seabed. It is a new state of the art vessel, only 8 metres in length, but purpose built to carry out very shallow survey work. It was built by Cheetah Marine over in the Isle of Wight after an open tender process.

This new vessel, RV Tonn, will support the completion of the first phase of the Infomar Project's mapping of 3 priority Areas and 26 priority bays, by the end of 2015.

Dr Peter Heffernan, CEO, Marine Institute said, "It's exciting to see this latest addition to the research vessels to focus on mapping the priority areas and bays. Our seabed mapping capabilities in Ireland are among the best in the world now with our inshore research vessels and the recent upgrade to seabed mapping equipment on the RV Celtic Explorer."

The INFOMAR (INtegrated Mapping FOr the Sustainable Development of Ireland's MARine Resource) programme is a joint venture between the Geological Survey of Ireland (GSI) and the Marine Institute and is the successor to the Irish National Seabed Survey (INSS). Covering some 125,000 square kilometres of underwater territory, the INFOMAR programme is producing integrated mapping products covering the physical, chemical and biological features of the seabed.

The surveys are carried out using a range of platforms, including the Marine Institute's RV Celtic Explorer and RV Celtic Voyager, GSI inshore launches RV Keary, Cosantoir Bradan and RV Geo and Airborne LIDAR. These are now to be joined by the RV Tonn. The programme uses ship-mounted acoustic multibeam sonar and geophysical technology to provide vital information on water depth for safe shipping and marine resource management, as well as analyse the properties of the seabed for information that can guide fishing, ocean renewable development, environmental protection, and marine archaeology.